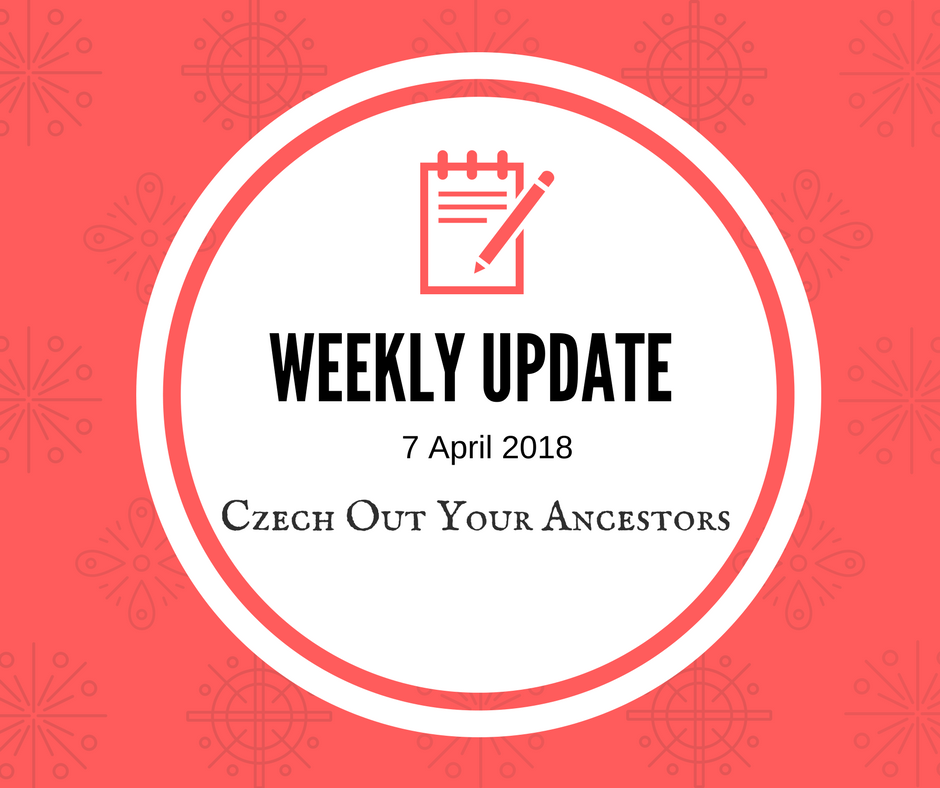 Narození a smrt translation – didn’t work on this at all this week.

Czech Genealogy for English Speakers – or this.

“Grundbucherbuch” – I did edit a few pages of this, but it was only so that my friend Lukáš would not completely hate me.

aaaaand…I slacked on these projects too.

I didn’t find any new cool software or tools this week.

Serial Posts in the works:

And I didn’t work on any of the serial posts…

…and I didn’t update the site.

Okay, so far this post has been entirely about what I did *not* do. But guess what, I actually did quite a lot. I emailed some 60 people who are DNA matches. I collaborated with about 20 of them. I placed about 10 of them on this giant crazy tree I’m building in Ancestry. By the way, there are some great features about Ancestry as a tree-building software. For example, their app is fantastic. It’s actually easier to add people (well, maybe that’s not fantastic because people will duplicate errors) in the app then on a desktop. Apparently LDS Ancestry accounts are linked to FamilySearch while non-LDS Ancestry accounts are not. This means that I am able to build my tree relatively quickly (it is a little bit tedious – lots and lots of listening to music in the background this week. Normally I can’t stand to listen to music while working on the computer because I can’t concentrate. But when it’s just matching and clicking I can hardly stand not to…)

I have explained where I’m at in the research about 10x: to myself (out loud…whiteboarding…wow, uh…I’m not a nerd…), to Danny (every day, sometimes multiple times per day), to my dad, to my DNA matches and collaborators over email, to my distant Czech friends who are not related in any way but are nice listening ears. I do not want to post my results on this blog until something is solved. But right now, with my Theory #1 (which is that my great grandpa had an unknown child with a woman in his community, and that child had a son, and that son had a child who is my dad’s close DNA match, as a half first cousin) I have narrowed down the candidates for the birth father’s mother to three people. That’s pretty great! I have put my match where I think she belongs in my tree and started to fill out the generations as far backwards as possible. If you can get 4+ generations back on every single line, your DNA matches will start showing up as “shared ancestor hints” on Ancestry. If my theory is correct, apparently my tree is supposed to “light up like a Christmas tree.” I am not exactly sure how that works. But I do know how to build out the tree.

This research has been extremely rewarding for me in several ways. But no, at this time I can’t see myself pursuing genetic genealogy as something I would like to do for other people. I love doing it for myself, though. It is interesting to find all the Czechs and their descendants. After about 2013, almost all my research on my Czech side has been in the old country. It’s more interesting, more exotic, more fun. I love the linguistic nature of the problem. I love the “new uncharted territory” aspect – even though guess what, lots and lots of Czech cousins have been building the same tree over on MyHeritage! But the Texas stuff is really interesting, too. The Texas Czechs stayed in a fairly insular community that had its own patterns and culture. It drifted from mainstream Czech culture. It’s very interesting to read about, and to try to find all the matches.

One frustrating thing I ran into this week was that my DNA match’s birth father’s mother is probably a descendant of the Miller family. You can take the fantastic Czech surnames for granted when you don’t work with surnames like Miller, Smith, Jones, etc. I mean, Svoboda and Novak are pretty terrible, too, but I think there is actually significantly more variation in Czech surnames than in English surnames, at least proportional to the population size. Maybe I’m wrong about that, though. It would be interesting to read actual data about that. I have to say that finding Noskas, Kulhaneks, Chovanecs, etc. is much, much, much easier than sorting out all these dang Millers and Müllers and Muellers. Even though there are tons of Noskas and Kulhaneks and Chovanecs – but there are fewer distant branches living in the same area. We are talking Texas, here. Go to Vratimov in the 18th and 19th century and try to sort out the Vašíčeks. It is super difficult.

On a different note, my husband’s grandpa’s y-dna test results came back! This is exciting…sort of. Now we have to figure out what they mean and what to do with them.

In my experience so far with DNA, there are a couple of different goals:

I guess it would be extremely frustrating to be an adoptee trying to do either of these. You could hardly do the second goal, since you have no tree. This is one reason I am so keen on figuring out this genealogy problem. It is not okay with me that my adoptee relative doesn’t know her place in the tree. I mean, she has a firm place in her adopted family’s tree. But she is biologically related to me, and she wants to know how. It is very compelling for me to try to figure it out. 500 cM match to my dad – that means she has only a few limited relationships.

If my husband wasn’t working on his master’s degree, we would have spent the evening planning out how this computer program for optimizing DNA research could work. It is really not that complicated of a problem. About 50x this week I groaned in frustration, “Why doesn’t such a tool already exist!?” I mean, the answer on all the forums is, “build a mirror tree!” It would be so much better to have some direction when building that tree. Like, start building a tree from these ancestors, not these other ones. But that will have to wait.