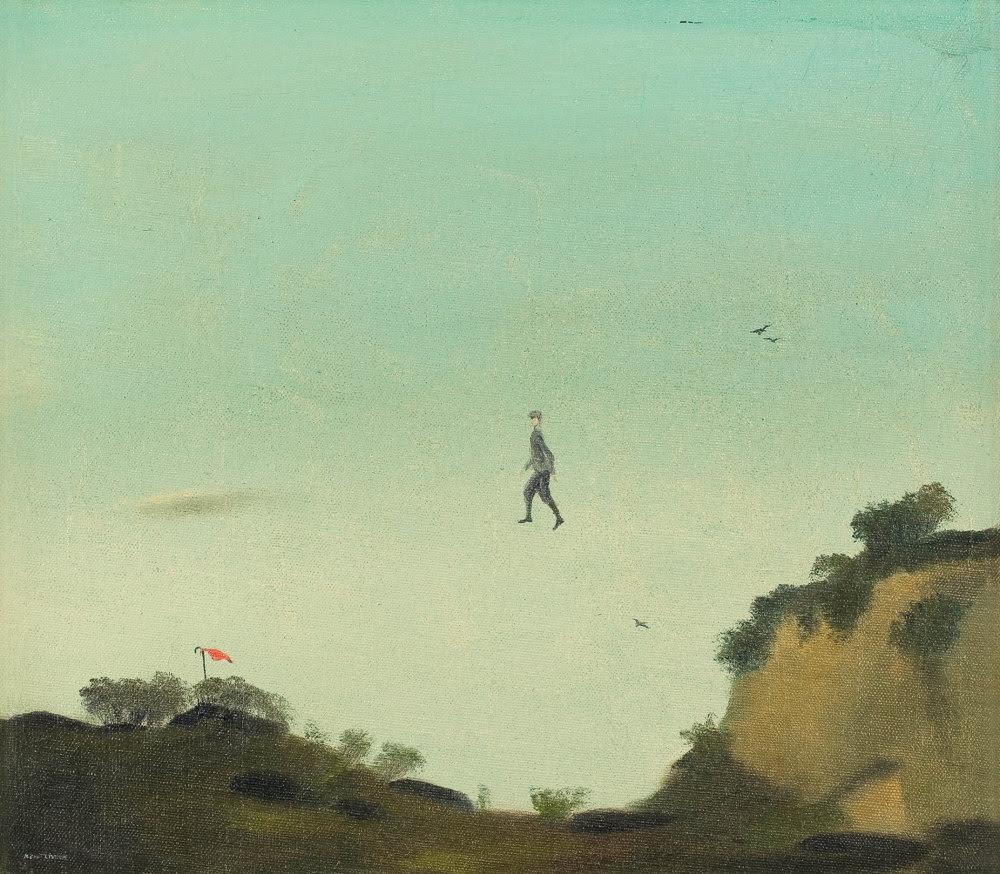 This comprehensive exhibition of the paintings by Czech painter, graphic artist and illustrator Kamil Lhoták provides an in-depth look at the wide variety of topics addressed in his works. Viewers will peruse not only his renditions of old and new means of transportation but also his portraits as well as his depictions of Holešovice, the Prague quarter where he was born. His penchant for surrealist elements, grotesqueness and absurdity are well-documented in this exhibition. Museum-goers will clearly comprehend what inspired Lhoták to create such brilliant paintings.

Lhoták was born on July 25, 1912 in Prague, which was then part of the Austro-Hungarian Empire. As a youth, he became infected with a form of polio that caused muscle weakness and had serious health issues. He was entranced with Jules Verne’s adventure novels and the paintings of Henri de Toulouse-Lautrec. Although he took up law studies at Prague’s Charles University, his true passion was art. Lhoták taught himself how to paint.

Even though his native Bohemia experienced much turmoil during the Nazi Occupation and Communist era, Lhoták was able to concentrate on his painting. His first exhibition took place in Prague during 1939, the same year the Nazis created the Protectorate of Bohemia and Moravia. His works can be viewed as apolitical.

As a significant member of Group 42, he made a name for himself on the art scene. The group featured many prominent artists. Other contributors included poet Ivan Blatný; painter, graphic artist František Gross; photographer Miroslav Hák; painter, graphic artist and illustrator František Hudeček; critic and theoretician Jindřich Chalupecký; and poet and artist Jiří Kolář. The members were influenced by a wide range of styles – surrealism, civilism, cubism, futurism and constructivism. The artists often incorporated themes relating to technology and towns, especially the periphery. Although the group only lasted from 1942 to 1948, its contribution to Czech culture was immense. Lhoták did not have to do military service during World War II due to health issues.

During the war, Lhoták was a prolific painter, churning out hundreds of artistic creations. In fact, one of his paintings was even praised by Pablo Picasso.

During the 1950s, Lhoták received acclaim for his illustrations of children’s books, such as Grandfather Automobile and for his cooperation on the film of the same name. The following decades saw changes in his style. He took up a serious interest in modern and pop art. Roy Lichtenstein’s canvases inspired him. He created his last painting in 1990, the same year he died in Prague.

Perhaps the painting that stands out the most in this exhibition is “The Man Free of Gravity” from 1942. In it, a man appears to be walking through the clouds, over a desolate landscape sporting a red flag on a hill. The painting has a dreamy quality, a characteristic of many of Lhoták’s works. This is by far not the only landscape that Lhoták depicts as bleak. The person looks out-of-place, not communing with nature. In many of Lhoták’s works, people are strikingly absent. Yet their very absence makes them all the more present. This painting’s surrealist tone is reminiscent of Czech writer Vítězslav Nezval’s novel Valerie and Her Week of Wonders, which focuses on a young girl’s horrific and fantasy-like dream, a book that Lhoták actually illustrated for its first edition in 1945. 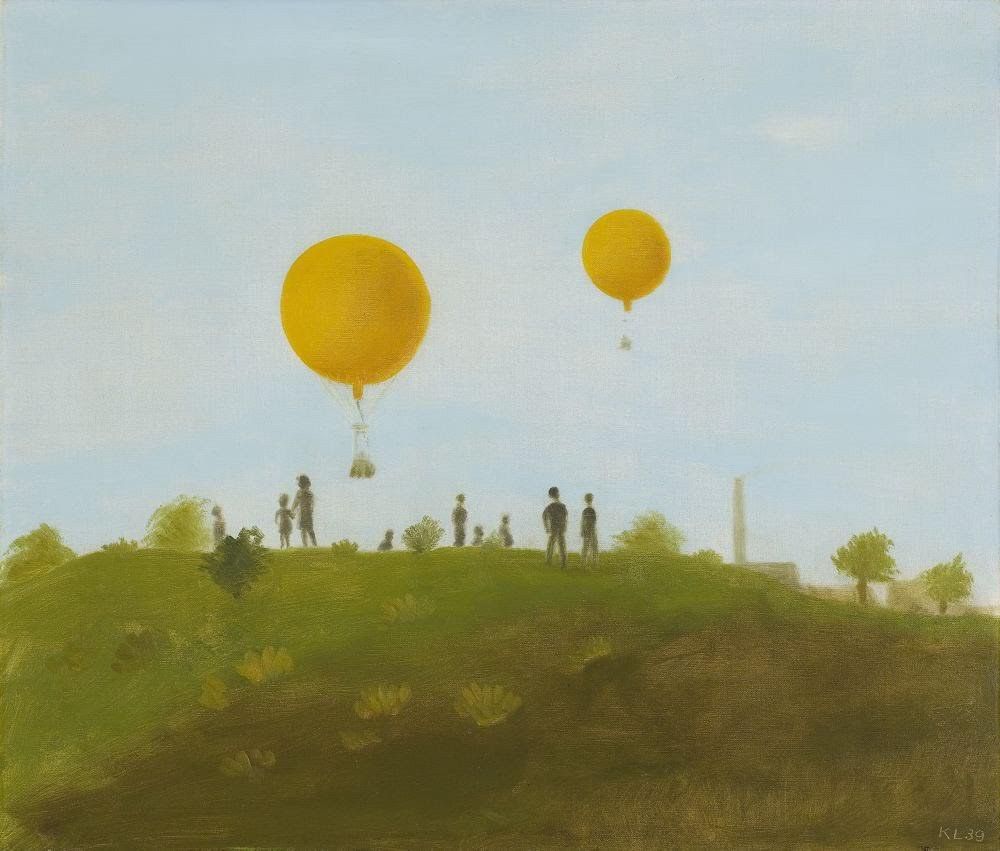 Lhoták’s renditions of hot air balloons have a prominent place in the retrospective. He often depicted old and new machines as well as methods of transportation. In his painting “Old Machines” from 1940, he painted a car next to a plane. In another painting called “Competitors” from 1940, Lhoták painted a car next to a hot air balloon. He accepted change as a constant and embraced both new technology and old. His paintings of trains, motorcycles, cars, airplanes and hot air balloons show a reverence for technological advancements and a nostalgia for out-of-date inventions. We see motorcycles and cars in desolate landscapes, disturbing the bleak atmosphere. Indeed, his landscapes are often dotted with machines.

He also is known for his works concentrating on the disappearing periphery of towns, He embraced the forever-changing townscapes as technological advancements influenced the character and appearance of cities.

Lhoták portrayed his birthplace of Holešovice in some works. He depicted this part of Prague as dark, mysterious and dangerous. His “Murder in Holešovice” from 1941 is one example. It could be seen as reflecting the sordid quality of inner city living.

However, all Lhoták’s paintings were by no means gloomy. His “Scene in a Park” from 1954 is a tranquil rendition of people relaxing on a nice day. We see people engaged in conversation while a girl carries a basket and musicians play.

Lhoták also was a talented portrait painter. He created about 60 portraits, including portrayals of artists such as František Hrubín, who is depicted with a Buffalo Bill poster in the background. He also concentrated on portraits of women. He painted one young woman who did not have any hands. His rendition shows her from the chest up so that her hands are not visible. The viewer sees her as an individual, not as a person who is physically challenged. Lhoták also painted athletes. His “Baseball Players” from 1947 shows four men from the side and from behind, giving a unique perspective. He also focused on cyclists and horse polo players, for instance.

Lhoták was influenced by his time in France during 1923 and had a certain affinity for that country. He loved to place French flags in his paintings. His “Old Port in Marseille” from 1939 features a domination of rich blues – water, blue boats, the blue of the French flag and a blue sky.

Some of his book illustrations are also on display. He was well-known for his illustrations of children’s books, including The Adventures of Tom Sawyer. In his illustrations, he takes up some of the same themes as he does in his paintings – motorcycles, cars, hot air balloons and airplanes. During the second half of the 1940s, he often designed covers for war novels, rendering tank battles, for instance. Illustrations also highlighted towns and houses as well as the periphery.

Lhoták captures the unexpected in often grotesque environments. His paintings are full of surprises. They are lively, despite the fact that there are most often only objects depicted. His works are characterized by a poetic fragility. He shows the beauty and the bleakness of the periphery of towns and lauds technological innovations. This exhibition makes it clear that, for Lhoták, change is the only constant.

The exhibition will be up until April 22 at the Prague Obecní Dům, open 10 am to 7 pm, daily. Click here for more details.

Tracy A. Burns is a writer and proofreader who has lived in Prague for more than 20 years.

1 thought on “Kamil Lhoták: A Retrospective at Prague’s Municipal House”