This month for the Czech Book Club I read the first volume of “The Good Soldier Švejk and his Fortunes in the World War.” The entire book is divided into four volumes (Behind the Lines, At the Front, The Glorious Licking, The Glorious Licking Continued), each of which are some 150-200 pages long, so I decided to save some of this fun for next year.

My English version is the 1973 translation by Cecil Parrott, a British translator. It is pretty good, and that is saying something. This is a particularly difficult piece for a translator to work with for several reasons. First, to accurately portray obecná čeština, aka colloquial, common Czech is impossible; you can’t simply translate this into slang English, which carries too many connotations which are just not appropriate. For example, an educated group of Czechs might get together and speak colloquially, whereas adding a layer of slang English would add false colors to the characters. Apparently there is a lot of tone missing from this register difference which just doesn’t translate well. So basically, when you read this book in English, a lot of the humor is missing.

The translator also bemoans the fact that there aren’t enough choices of words in English for nuanced obscenities which can really convey the precise meaning of the words in Czech.

My friend Petr groaned about me picking yet another, “old and difficult Czech text.” This book was originally written almost 100 years ago, so yeah, it is pretty old, and of course that compounds the problem.

The first time I heard the name Švejk was at my cousin Roman Vašíček’s sister’s house on our first trip to the Czech Republic in 2016. They tried to explain what it was, and how we had to at least watch a movie of this book. Later on that same trip, we mentioned this recommendation to my friend Lukáš Svoboda while he gave us an off-the-beaten-path tour of Prague. I remember very distinctly how he looked at me and said, “Yes well, you need to be careful with Švejk.” Later I mentioned something about this book to my friend Tomáš Drusa, and he said, “Oh Švejk. Everybody has different theories about whether he is a madman or a genius, and of course none of them can be proved.” Švejk is ubiquitous. He is probably the second most popular Czech literary character of all time, eclipsed only by Jára Cimrman. If you are Czech, you know the general gist of the story, you would recognize a cartoon or live action representation of this character, and you know what it means to “švejkovat”, even if you have never read the books.

By the way, the verb “švejkovat” means to, like Josef Švejk, obey orders literally (either blindly or on purpose), kind of like Amelia Bedelia, only you can imagine the consequences of doing this as a Czech soldier in the Great War would have vastly different outcomes than as a maid for the wealthy Rogers family. Although the resolution tends to be surprisingly similar; in most cases, Švejk manages to wriggle out of his nasty situations, not with baking a delicious pie or cake, but because of his “purity” and “sincerity.”

Every Czech history book which I have read or video which I have watched so far has mentioned Švejk. Everybody knows the Josef Lada drawings of him. He is even engraved in stain glass windows of multiple restaurants across the Czech Republic, usually restaurants named after him.

Švejk has become a symbol for Czechness over the past century: the little man who must submit to an outside force running and controlling his life, a dark sense of humor oozing with sarcasm – but always, at the same time, submitting to the outside force. Most people seem to think Švejk is some kind of anti-war novel, and that Hašek used satire to denouncing the atrocities and horrors of war, kind of like what Voltaire did with Candide. Having read both, I can see the comparison, except Švejk is set in World War I Austria instead of 1750’s Westphalia and lacks the gruesome sexual themes but has a much heavier handed dose of anti-Catholic criticism.

Which brings me to my next point: it seems very much to me that most people do not actually bother to read Švejk. The symbol has kind of seeped into the culture, and so people rarely bother returning to the actual original source (which actually could be rather difficult, since apparently Hašek does not have an “authorized” version of his works and the original manuscripts do not survive in entirety).

If people were to actually read Švejk, they would agree with my favorite Czech-English translator Mark Corner when he says, “Švejk [is], to put it mildly, not at all the sort of fellow you might like as a friend: he lacks compassion of any sort; his fearlessness reminds one far more of a large postmodern thug than of a courageous soldier; he is physically violent, enjoys brawls, is sarcastic, impertinent, mendacious, a trickster and a bully, who believes that noble behaviour belongs only in novels. On the other hand, he is quick-witted, streetwise, not only unbulliable, but also indestructible, indeed altogether the very model of a twenty-first-century ideal – he is attractive to women, too, especially because of his well-developed thighs. I find it difficult to think of the work as an anti-war novel, as the Left did long before Communism overtook Czechoslovakia. It is certainly anti-Austrian (but Austria had disintegrated before it was published, and so there was little point in satirising that state any more), but if one were determined to find some message, it would surely be that if you adopt Švejkian optimism and impervious loutishness, even war can be a fun game.” (Hašek, Jaroslav. Behind the Lines: Bugulma and other stories, Karolinium Press: 2012. 202)

That is exactly the message of the book. Nothing more, nothing less, and it is actually wholly depressing and unsatisfying to me. I especially find the anti-Catholic undertones to be nasty and cruel, going far beyond disrespect and approaching something that, were it not veiled in the protective layer of another language and a translation, and were it not for it being such an important cultural monument, I would normally put away and not read. Basically, Hašek – like Voltaire – does not have a sacred bone in his body. You just read what he writes with a giant bucket of salt. 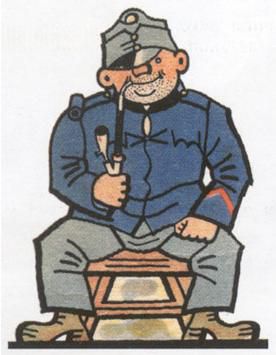 I wouldn’t reread this book, but I would (and have) watched the film. Rather, one film adaptation, the 1957 film with its less than perfect subtitles. The film version removes some of the problems I have with the book. For example, it does not go on for 50 pages (!) about desecrating altars. There is an added version of slapstick and situational humor that is portrayed much more clearly and quickly on the screen than the page. That said, the film was really slow, and it was sometimes hard to stay awake. The kind of jokes, the kind of humor – it is just more and more of the same. Inside you feel horrified, but you also want to laugh, but part of you does not want to laugh and feels slightly sick for laughing at all.

The funniest parts to me all had to do with anecdotal stories which Švejk told, for example the one about the guy who played cards and tried to lose but kept winning instead. This story made me laugh out loud.

In the end, of course someday I will read and listen to the audio versions of the other three parts of this very long novel – by the way, not because I care very much about the characters, but rather because the anecdotal stories are interesting and culturally valuable. It was too much for me to personally do in one go; A little bit of Švejk went a long way, and even though I personally love the dark, cruel, witty Czech sense of humor, in my opinion this wasn’t it at all. It was mostly just dark and cruel, and too much of that is depressing.

However, through reading Švejk I discovered some of Jaroslav Hašek’s other works, notably Behind the Lines: Bugulma and Other Stories. I read this in two sittings and thought it was one of the most hilarious, satisfying reads ever. The main character was probably closer to Hašek himself – Gašek in the stories, because Russians start all H names with G’s. I will write a review of that book later, but I have to mention it now because I do not want you to give up on Hašek because I gave Švejk a less than perfect review. Hašek had a crazy, fascinating, adventurous life and has much insight into humanity. I just think he is better at short stories than novels. Or maybe it is just impossible to write a novel with a caricature as the protagonist.

1 thought on “The Good Soldier Švejk”