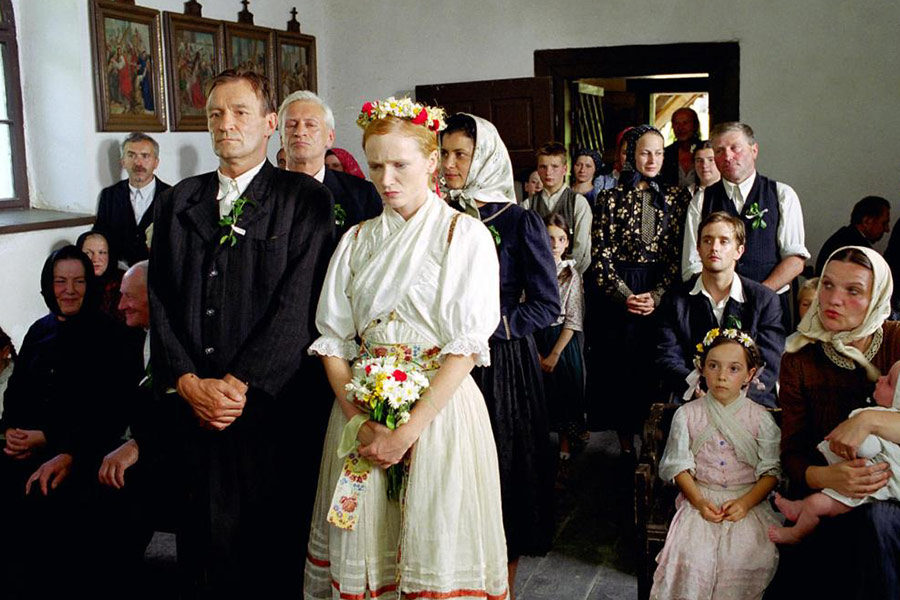 Last night I watched the 2003 Czech film Želary. I wanted to write about it here because of how it added to my background knowledge and understanding of my ancestors.
Spoiler alert! 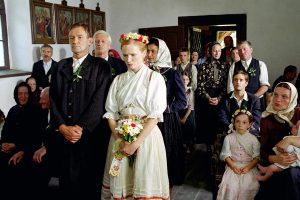 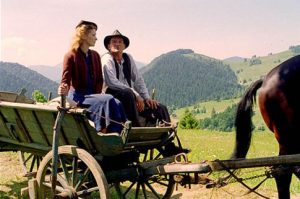 Would I recommend this film? Yes, but with a big warning: it is really graphic and violent. I am sure that the language itself mirrors this, but fortunately I’m still a really long way off from understanding cursing and foul/disturbing language in Czech. I looked away during the really graphic parts, or rather, I tried to. I don’t need those images scarring my nightmares. But some of the very graphic parts came without very much warning, for example, the priest getting shot by a machine gun took me completely by surprise, and was very disturbing to me.

The basic plot of this movie is that there is a young woman who works as a spy during World War II, and her identity is compromised so she has to go into hiding. It’s arranged for her to go with Joza Janda into a tiny mountain hamlet in the Beskydies where she can disappear. Oh yeah, surprise surprise, in order to be accepted into the community, which hasn’t changed much for the past 100 years, she has to marry him – a complete stranger.

She goes, she marries him, she suffers from depression, she learns to appreciate the place and Joza himself. Meanwhile, she interacts with other characters who have problems in this tiny place. Lipko (I think that was his name?) is the bastard son of a woman who married a drunk sprosťiak. He is physically and emotionally abused by his father and also by the schoolmaster in the neighboring village in the valley where the kids go to school. He basically becomes a beggar who hides out on his own in an abandoned ruin across a river with some kind of dangerous quicksand.

Another character is a spunky little ~8 year old orphan girl with a goat who doesn’t have any fear of adults. Other notable women include the girl who may or may not be a whore who gets raped, the wife of the jerk who constantly beats her who has some kind of problem (it was unclear to me if it was related to childbirth or physical abuse) and then dies, the woman who had a baby who died and who nursed Lipko, who she then called her “milk baby.” There were some other interesting characters, like the Priest who feels really conflicted about saving Eliška/Hanulka’s life by lying about her identity – through performing the holy sacrament of marriage, no less. He probably feels really relieved when he sees how they actually have grown to love each other, and that their marriage is not a sham. There is also the schoolteacher who feels really ashamed at his hatred to Lipko, and tries (somewhat halfheartedly) to confess to the Priest.

Some observations:
The tongue-in-cheek moral of the story is don’t let your watchdog get shot, and never ever be naked, alone, and female if you want to not be raped. Also, life would be so much easier and less terrifying if people would just all agree to not drink. That would have solved at least a third of the major problems in the story.

My friend Petra’s tongue-in-cheek observation is that anorexic actresses are great choices for war films, since everybody was starving.

I thought it was really, really interesting that they used, “Emigroval!” (he emigrated) for a euphemism for, “He died.” (or rather, he was murdered by the Gestapo). Was emigrating really perceived with such a…I don’t know…with so much terror? I suppose emigration would be pretty similar to if a relative actually did die, especially in the earlier years of Czech-American emigration (starting in the ~1850’s, at least from Moravia). But in the 1940’s? Really?

I could really relate to Eliška as she was transported “back in time” to this place. She experienced major culture shock, especially when she discovered that there was no electricity in their home. By the way, the home was just some random abandoned home which Joza fixed up. They referenced abandoned houses. I have heard about Czechs abandoning their homes (after they emigrated, because they could not pay the mortgage, etc.) I have also seen first hand that the registration of abandoned homes in the land records. It was really interesting to me to visualize what that might have looked like.

And of course, to visualize the home itself. It was actually bigger than the Trojanovice home in the open-air museum which we visited. But it was also very similar, and the stove was straight from a Josef Lada illustration.
All in all, I really loved this film. Oh yeah, I should mention that I only watched the first half with English subtitles. For some reason, the only subtitles I could find were split into two files, and I couldn’t find an easy way to append the files together. So I just watched the second half of the film in Czech, and I think I understood most of it, at least the gist of it, anyway.

I think at one point the Gestapo thinks they have caught Eliška’s trail, but then they can’t find her because she blends in so well, so…they decide to shoot the witness point blank in front of everybody? What!?

What I didn’t understand very well was basically anything involving the Russian soldiers (I think they were Russian…they seemed to say, “Na zdrovya” instead of, “Na zdráví!” when they were drinking. But I think this is because I don’t really know very much about this part of history, and it’s true, it’s like a black hole in my knowledge, learning about Russian relations with the Czech world.
Here’s what I think happened: the Russian soldiers come to the village. Everyone is excited and serves them. I don’t really know why. They get insanely drunk and crazy. They start shooting their guns. Everybody goes home. One of the Russian soldiers decides to rape one of the villagers. He is shot by another villager (and she – with her brand new baby! – is rescued by Lipka), and the Russians go crazy shooting everybody? Um…what? Why? The villagers all run and hide, and try to treat their wounded. Joza is shot in the process of trying to save the guy who originally killed the first Russian, and he loses so much blood that he dies.

The other thing I didn’t really understand was the very, very ending. But then I talked about it with Petra, and I think I get it. We never really know what happened to Eliška, but the ending is 20 or so years later, after she has obviously gone back into the “real world” again. She’s wearing 1960’s clothes. She goes back to Želary, meets one of the old women who remembers her when she was Joza’s wife, she’s totally shocked that she’s still alive, and then they both start laughing like crazy people. But…why? Petra says it’s just black Czech humor, to laugh when you should be crying. I guess I do understand that; I just wasn’t sure if I had missed something.

I think you could watch the film and see just the story (which by the way, is apparently based on a true story!?) You could also watch it and see some interesting symbolism. Something about how the poor, small, miserable, weak, and oppressed can still accomplish really great feats of heroism and courage, and how this symbolizes the Czech/Moravian spirit. Maybe some other symbolism in how the Catholic church, which was the cornerstone of morality and stability in society, was completely obliterated by communism, just like how he was shot to death suddenly by a machine gun, for no logical reason whatsoever. There were also some serious themes of forgiveness, when Joza, the biggest hero of the whole story (and a little bit of a Gary Stu trope) goes back and saves the life of the jerk whose arm he broke (and rightfully so; he was trying to rape his wife! Actually, I don’t know…maybe he succeeded…I didn’t see…I guess he probably did not).

Here are the questions I have now that I have seen this film: