Hey! While looking for something completely different, I stumbled across something I absolutely must share with all of those who have some kind of connection to Texas Czechs.

When Czechs immigrated to Texas, they brought with them deep and abiding love of literature, education, and culture. After all, Jan Amos Komenský was a Czech. It would have been a terrible sacrifice for the first generation of immigrants – not only the prospect of frontier, pioneer living, but especially the knowledge/fear that their children would not have the same opportunities for education as they had had in the Old Country. Indeed, the school records don’t lie (if only I understood them better!); we have a huge pile of evidence that our Czechs were educated before coming to Texas.

After arriving, Texas Czechs started to create all kinds of fraternal organizations. One of the largest that still exists today is the SPJST. If you’re a Texas Czech, you have probably been to one of their lodges for some kind of activity, like a barbecue or a dance (and let me tell you, those 80 year olds danced circles around my husband and I when we went there a few years ago! I’m not exaggerating even a tiny bit, guys.)

SPJST, or Slovanska Podporující Jednoty Státu Texas had a journal, aptly named Věstník and you can read many of its back issues online at this website (issuu.com).

It looks like some of the issues go back to the 1930’s, which is really great! There are also newer issues, and it seems to stop ~2001. It does not look like a complete collection, though the site is a little obtuse to navigate, so I could be wrong.

This is the exact reason why I am so obsessed with learning Czech. I really want to be read this.

Notice that this journal only was published online in 2015. From many of the biographies, histories, and articles I have read, I know that there are dozens (or perhaps more) of similar journals and newspapers – many of which are in Czech – that have not yet been digitized and made available to the public.

The best part about this site is that it’s free! I haven’t played around with their search engine yet, but it looks like there are other journals and magazines here to read. But this one is a real gold mine; there is an extremely high likelihood that your Texas Czechs were members of the SPJST, and as such, they probably had stuff published in their magazine. Remember, these old, local publications were something like the Facebook of our day. They published things like, “So-and-so came to town and paid the publishers a visit.” “So-and-so is in the hospital.” 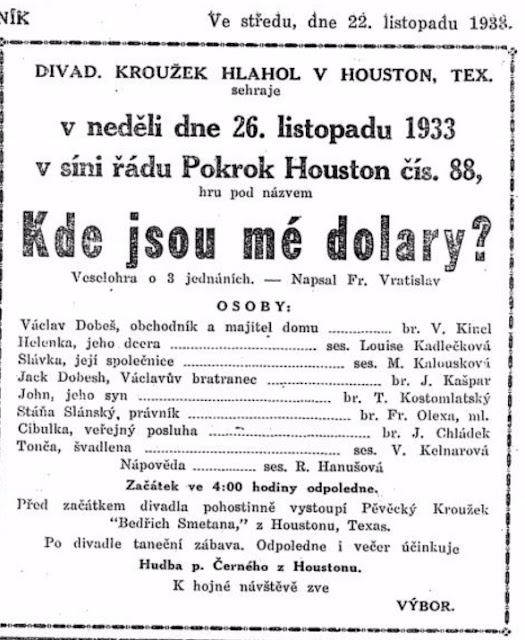 An ad for a play in Czech called, “Where are my dollars?” Apparently Texas Czechs were not only interested in publishing, but also in the theater!

And don’t let the age fool you; sometimes these kinds of old publications are much more gory and graphic than you might find in today’s publications, describing in great detail every aspect of a bloody crime, or a terrible tragedy, etc. I am really excited to try to unearth such treasure in Věstník, and I hope you have fun playing with it, too! 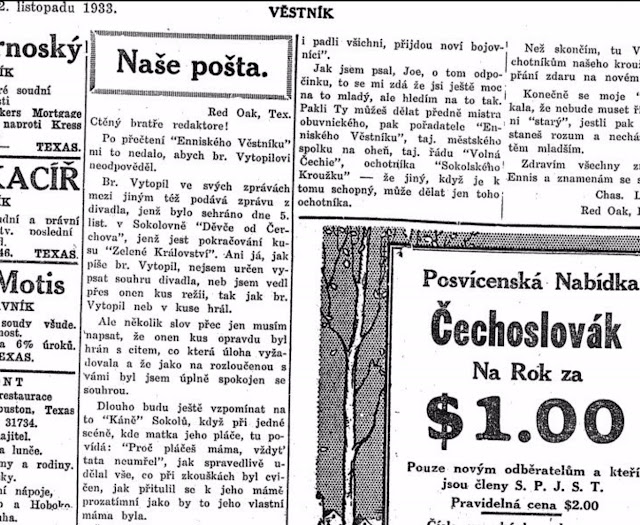 And here is a letter reviewing a different play, and how pleased he was to see it, etc. Imagine if your ancestor were in this play, how it would feel for you to have this extra bit of information coloring the details of their lives!