About six months ago I read a fascinating article in National Genealogical Society Quarterly called “Thinking Philosophically About Genealogy” by Stephen B Hatton. He writes:

Th[e] substance and properties view, held by philosophers from about the fourth century BC until the 1780s, tends to focus on how people think and know. This view sometimes reduces individual identity to a conceptual framework, including retention of past events in memory and contemplation within a rational scheme. The advantages of this view for genealogy are that it supports concepts of genealogical identity and different attributes of each personal substance. The disadvantages are challenges in specifying an identity and accounting for change. Philosophical and neurobiological reasons raise questions about identity after traumatic events. The substance view also ignores social objects (created by society), and it is weak in its accounting for events.

Alternatively, humans can be viewed as passionate and emotional beings. Individuals can visualize their identities as life narratives involving an overarching rhythm acquired, expressed, lived, and told from their life experiences. Identity arises from encounters in living and in acting in unique impassioned relation to specific events, times, and places. Each individual is a unique blend of emotions and passions. (10)

The article goes on to discuss ontology and etymology, which have been subjects of an ongoing discussion I have been having with my husband for the past year about truth and how we can know it. It’s a fascinating discussion, and I have discovered myself coming back to these thoughts over and over. This article was really fascinating to me, and you should read the whole thing. The TLDR conclusion:

Unlike practitioners of other disciplines, genealogists have not considered philosophy. For genealogists to acquire deeper insight into their most basic assumptions and concepts and deepen genealogy’s theoretical foundation, that interaction should occur.

This ontological framework can serve as a foundation for understanding the discipline of genealogy. The framework’s key elements are objects, relations, qualities, and events. It may shape future theoretical thought about genealogy. It lays the groundwork for considering the field’s basic concepts, for example, genealogical identify. The framework also suggests how to approach genealogy epistemology, and it has implications for genealogical methodology. It prepares for grounding the Genealogical Proof Standard. (18)

And so, I will take Hatton’s challenge and attempt to write about my own personal Philosophy of Czech Family History Research.

I know for sure that part of “why” I research my Czech ancestors has to do with understanding myself better. This comic sums up my brain pretty well: 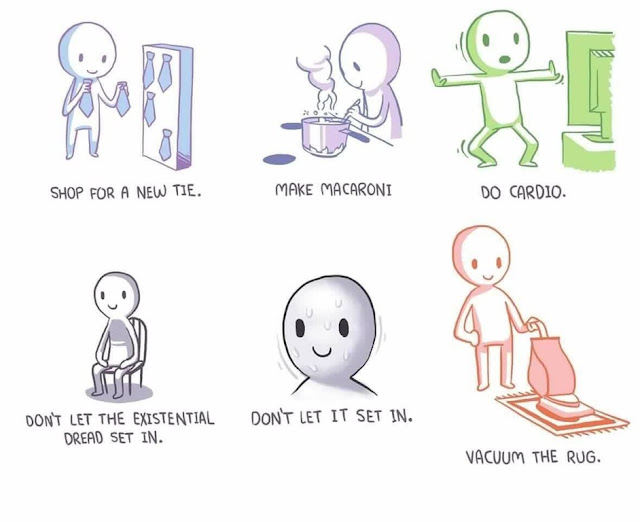 Of course, it’s funny, but it is also somewhat true. Who in the heck am I and what am I doing here!? Okay, make the kids their school lunches. Do a load of laundry.
For me, the “existential dread” isn’t usually about long term spiritual identity so much as thoughts about the continuous paradox that I live as a smart woman who chooses to stay home and perform the semi-brainless job of mothering small children. Semi-brainless, and yet some of the problems I face are literally unsolvable. Like, menu planning. I estimate that a good 1/3 of the documents in my google drive are attempts at streamlining this process. All of them spectacular failures. Spectacular, because if I am anything, it’s tenaciously passionate (myopic?!) about my interests.
This paradox of being a homemaker is extremely, uber-sensitive. When I became a new stay-at-home-mom, I attempted to blog about it, and it turned out that my post(s) not only offended a lot of people within my family, but they also generated a lot of traffic from voyeuristic working mothers who I had never met and who decided absurdly to side with my view (that it’s worth it to stay home, and that women should try to do so). I think I took that post down because dealing with it was a headache.
But I’ve thought about it for years and years. I almost feel boxed in to my original perception: that women who can should stay home with their young children.
What the heck does this have to do with Czech genealogy?
So. Freaking. Much.
When I study these women of the past, I see the pattern of parenthood played out over and over again. What kind of mothers were they, what did they think and feel about their role, how were they perceived by society, how did they perceive themselves, how did their relationship with their spouse affect their role as a parent, and especially, what do all of these things that happened 100, 200, 300+ years ago mean to me?
I have been working on a blog post for a few weeks for my personal genealogy research blog about, “Am I glad that my ancestors were polygamists?” This was initiated from a casual remark made by my friend as he analyzed the text of an Ellis Island entry form. This form specifically asked, “is this person an anarchist or polygamist?” He wrote something like, “Well, I for one, am glad to know that my ancestors were neither anarchists nor polygamists!”
Obviously, this caused me to ask myself, “Hey. Some of my ancestors were polygamists. How do I feel about that? What does that mean for me?”
This is not the time nor the place to broach that fascinating topic. Indeed, I will probably just end up writing a book about it instead of just one blog post, because it is way, way too complicated of a task. But the essence of that question is this: I decide who I am through the choices I make each day, but I have no control over what came before me. How does my past determine what I am today?
This is one big reason why I want to study my Czech ancestors. I want to understand how their choices affect my identity.
My other reasons, in no particular order, include:
I like feeling smart, and it takes a lot of brain power and effort to solve these puzzles. It works a part of my brain that I really enjoy using and expanding: languages.
I want to do temple ordinance work for my ancestors. My Czech ancestors are an obvious choice because literally nobody else in the world is working on preparing these lines for temple work.
Another reason has to do with the connections I make with real live people who are interested in the same thing, or who are part of my family.
I suppose on some level I’m a voyeur. Curiosity. Novelty. My patý cousin Roman said that life goes much faster when there are new things that happen each day. It’s my answer to ridding my humdrum life of its humdrumity. Because literally, I feel like I would go insane if I lived my life like some of my peers: completely focused on the mundane tasks of motherhood. I. can. not. handle. that. Not only do I need an outlet for creativity, but I urgently need to learn new things, and genealogy is the perfect field for that. Czech genealogy even more so, because even though many of these topics have been studied, few of them have been studied in English. So it’s a novel territory of fascinating research.
Here are some few examples of the kinds of questions that continue to flood my mind:
This is why I study my Czech ancestors: