My friend challenged my assumption that life expectancy rates were pretty similar across Europe in my last post about this subject, so I decided to look into it further.

I used a parish register that I had recently been examining to gather some data. This is the 1781-1783 Birth, Marriage, and Death register for the village of Trojanovice, which is a mountain town bordering Frenštát. It did not have its own separate church, but during the Josephine reforms of 1781, priests were required to keep each village’s data in separate registers even if they were part of the same parish.

The data I gathered *should* have all the births and deaths for the 3 year period for this village. There are no known protestants or Jews living in this village, though I suppose that it is possible that they were missed. The registers include all the baptisms, so that means that some stillbirths and deaths before the child could be baptized were not recorded, which skews the numbers slightly. Illegitimate children were baptized.

During this three year time period there were 331 baptisms (and thus births) and 241 burials (and thus deaths).

My husband, who analyzes plant population data all day, made me some nice graphs with the data I gathered. This data reflects ages that are to the day. Most children who were born or died before the age of 1 had their age recorded to the exact year, month, and day. 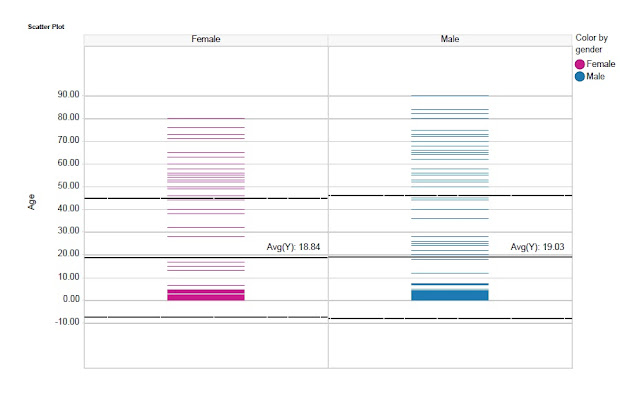 Here is a graph that shows the average age at death, including all the children who died before the age of 4. As you can see, the average age for women is slightly less than 19, and for men slightly over 19. But you can also see the extra huge concentration of deaths under the age of 4. Clearly, that is skewing the data; every line represents one death, and you can see that there are some people who lived past 80, even up to 90! 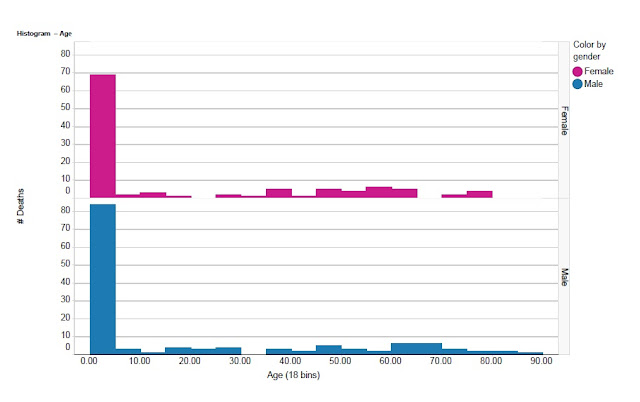 Here you can see the graph plotted out with all of the data again. Notice that there seems to be a slight curve, if you do not count the children who died young.
This graph should be the most informative of them all. It certainly shocked me. I had always read that the infant mortality rate in the 18th and 19th centuries was ~25%. This data shows that in Trojanovice, it was over 50%. 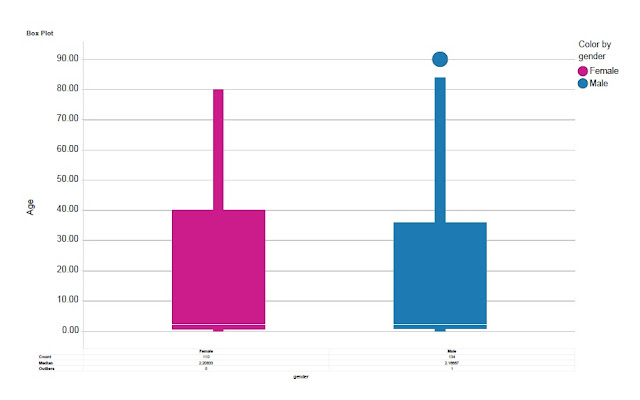 Here is another graph including all of the data. That little white line at the bottom represents the median age at death.
For women, it was 2.2 and for men it was 2.16. That means the median age of death was slightly over two years old. This data is from 110 female deaths and 134 male deaths. 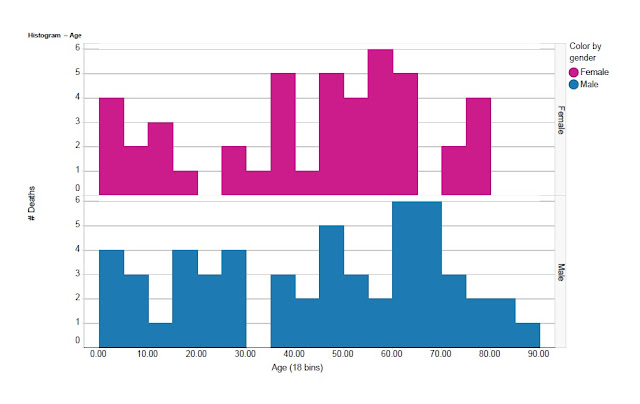 Here is the data if you remove all the deaths for children aged 4 and younger. My husband says that there needs to be more data in order to truly see a curve; that 45 female deaths and 54 male deaths does not give you enough data points. You can see the curve more clearly here. It’s so interesting that the mortality rate spikes for women in their early 40’s. Maybe this is due to complications with pregnancy; it is true that the older you are, the more likely you are to have birth-related problems. Doctors today label any pregnancy for a woman over 35 as “high risk.”
Notice also that the male mortality rate is much higher in their 20’s, but it goes nearly flat during that same time period for women. Were there more risks for men, who were certainly laboring in the field, during this time? The data does not seem to support a great risk of childbirth for younger women. Note, though, that women in this village tended not to marry extraordinarily young. In fact, the age of majority was 24, and any marriage before that age would have required the written consent of the bride’s father. Not that young marriages didn’t happen, but women really did tend to be ~21-25 when they married for the first time, at least from this place. 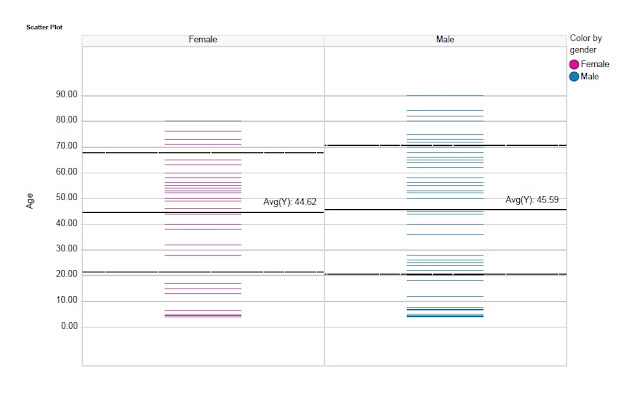 This graph, without the children who died before the age of 4, shows that the average age of death for men and women is almost exactly the same: 44.62 for women and 45.59 for men. 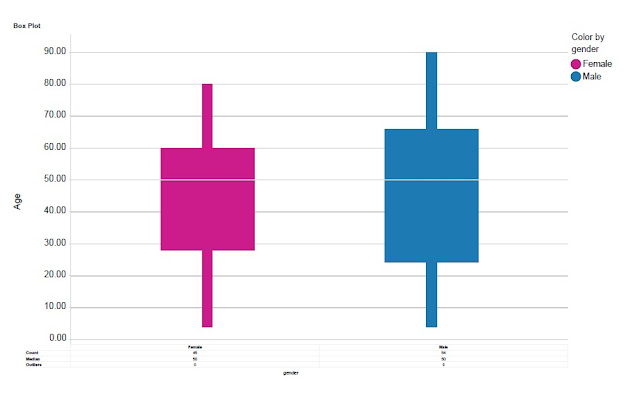 And this final graph shows that the median age of death was exactly 50 for both men and women, for all people who lived above the age of 4.
So, basically, my friend was correct: 30 would not have been considered old. And assuming that the mortality trends stayed relatively stable throughout all Europe is not a useful or meaningful assumption; we can see that 18/19 would have been the average life expectancy for Trojanovicans between 1781-1783, which certainly would not have been considered “old.” I do know that the Josephine reforms brought about huge changes in laws having to do with health and sanitation regulation, but I’m sure they were not implemented instantaneously, and certainly not wayyyyy over on the eastern corner of the country in a tiny, rural mountain village.
The most shocking, jaw-dropping revelation I had from this data was to observe the infant mortality rate. Of 241 burials, 142 of them were for children under the age of 4.
That means that ~60% of the deaths were for children who died young.
There were 330 births in this same time period. 142 deaths for children <4 / 330 births = ~43% of children died before the age of 4.
This is horrifying.
I have slowly (but surely) been translating for myself the book Narození a smrt v české lidové kultuře by Alexandra Navrátilová, (Vyšehrad, 2004). I wish that this book were available in English. It has the exact information that I want to know, including folk traditions, beliefs, customs, and rituals associated with birth and death.
It’s so relevant to me, as a 29 year old mother of 4 children who were spaced very close together. I sometimes feel a close kinship towards my Czech ancestors because my husband and I lived the reality of having “an annual pregnancy” for a few years. I think it’s a little bit way too personal to share my own thoughts and feelings about birth control online; I don’t even do this face to face with anybody besides my husband (um…obviously) and *maybe* some select (female) friends and family members, but I will say this: I am really humbled by my Czech ancestors. It seems that up until my great grandfather’s generation, my Czech ancestors strongly believed in (or at least were resigned to) having many children. Whether or not they used means to prevent pregnancy (either magical or medicinal, both of which are mentioned in Navrátilová’s book, and deserve their own blush-worthy blog post), the fact is that my Czech grandmothers had many children.
And many of their children died. Far more than 25%.
I knew from experience searching in the parish registers that no family was untouched by infant mortality, but I had no idea it was this high or prevalent. Of course, now I need to go back and gather some more data. Danny says I need several thousand data points in order to see the broader statistical patterns and curves. I’m pretty sure that some other people have gathered this data before; I should try to collaborate with them and see if we come to the same conclusions. No sense in working in a bubble when we can all mutually benefit by sharing our research freely.
I turn 30 in one month. If I were living in 1780’s Trojanovice, I would not be “old.”
But I would almost certainly be pregnant.
(And Pop, Joe, Sarah, Mary Lynn, and all other curious people who aren’t afraid to ask even though that’s the most socially un-askable question that exists, no, I am definitely not pregnant.)