Would I rather be old, or young?
To me, the answer is obvious. I would much rather be old, but not old enough to lose my mind.
There are so many obvious reasons why being older is better than younger, but mostly it is summed up in one of Stephen Covey’s ideas about maturity, which is that as we grow older, we move from a state of dependence to a state of independence, and then finally to interdependence. Interdependence is, “when people work together to achieve a common goal,” and it is, “how mankind has achieved things together that no single person could do alone…[It] is the state of human development of greatest maturity and power.”
Childhood is about learning dependence.
Adolescence is about learning independence.
Adulthood is about learning interdependence.
But how do you know when you have reached adulthood? I know plenty of adults who are not interdependent at all. And of course, upon self-reflection there are many (many, many) areas of my life where I am still trying to reach that state of interdependent maturity.
I read Pope Joan by Donna Woolfolk Cross this year. This book was set in the darkest part of the middle ages, the 850’s. It was really interesting because I had never really thought about what every day life would have been like then. Apparently boys were considered men at the age of 13. Girls became women, meaning they married and started having children as soon as they became fertile (so, 11-14). If you lived to reach your 30’s, you were considered an old person. 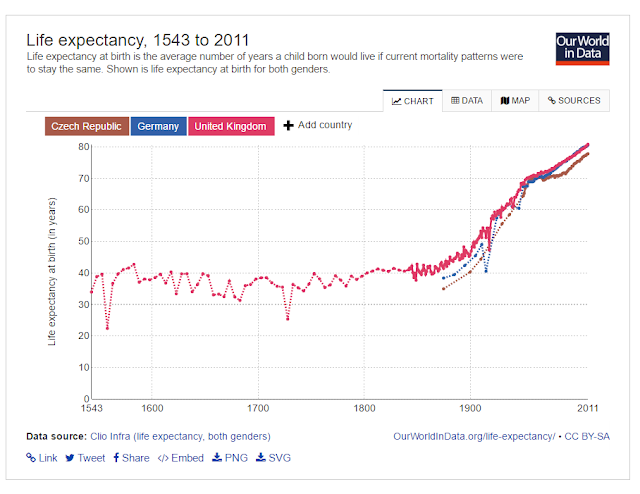 This graph is from Our World in Data. It shows the trend of life expectancy increasing over time from the 1540’s to 2011 in three countries: the Czech Republic, Germany, and the United Kingdom. Of course, these countries didn’t all exist since the 1540’s, and we can see that the data is only available post ~1875 (probably the creation of Germany). We can assume life expectancy trends were generally similar across Europe, though I’m sure there were some significant differences at key points in history, such as Bilá Hora, etc.

It is interesting to note that through the 18th and 19th centuries, the average Czech life expectancy probably hovered around 40-43. I would really like to analyze the data from the parish records more carefully to see if that is true. I’m positive this has been done before, and has been written in a Czech genealogy periodical like Naše Dějiny, Naše Rodina, or Česky Hlas. The first I have access to as a member of CGSI, but the others…well…I will have to write some emails.

It’s a pity that this graph combines data for men and women, because I’m sure that gender played a significant role in life expectancy. After all, in a time and place with limited medical knowledge and no reliable or socially acceptable birth control, women would have been at greater risk of death related to childbirth. I imagine it wasn’t very sexy back then to think, “hey, I could get pregnant!”

What it meant to be old 200 years ago is very different from what it means to be old today. I am sure that this fact is hugely influential in modern politics and legal policies. I know that a 40 year old doesn’t act or think like a 20 year old, and certainly neither does a 60 year old. No wonder the dark ages were so “dark” – teenagers were ruling the world! Imagine how hormonally hellish that would be!

I will turn 30 in the beginning of November. My husband and I joke that I will finally be, “a real adult.”

1 thought on “Historic Life Expectancy: What being “old” means”