Today it is my great pleasure to have a guest post by Lukáš Svoboda. He has an excellent Czech genealogy blog called Kulanův rodopisný blog that anybody interested in Czech genealogy should look at. If you open the page in google chrome, you can right-click and select “translate to English” if you don’t speak Czech.

He recently wrote an interesting post about house numbering, so I asked him if he would write something on that subject for English readers. Here it is. Thank you Lukáš!

———————————————————————————————————–
House numbers – they come handy in search for ancestors. They lead us faster through huge volumes of church registers and help us to solve various problems with people we seek. Where did they come from and what was their purpose? Certainly not to help genealogists and not to make their lives easier 250 years later.

Until recently I thought that they was simply made during the year 1770 just for easier orientation and later they came handy on various occasions. An old anecdote tells us of an impulse Queen Maria Theresa had after a desperate and futile ride through dark streets of Vienna in vain search for a certain house. Well, this is not why.

As I was browsing through thousands pages of old codes for Austrian and Czech Lands I found a couple of laws related to the numbering of house and surprisingly found out that this was only small, and relatively marginal issue of much more complex and concerted action which took part in that year 1770: die allgemeine Seelen-, Zugviehes- und Häusebeschreibung; that is, description of souls, draft animals and houses. Or in modern language some kind of census.

Looking for a recipe

The Seven Years’ War (1756-1763) fared poorly for Habsburg monarchy. None of the war goals were reached and worse than that, they finally lost most of the part of Silesia they had hoped to reclaim. What was much discussed in military and governmental circles after the war was not the sub-optimal performance of Austrian soldiers, but their inferior quality to the disciplined Prussian soldiers.

And no wonder; it was manorial lords who were responsible for the providing of raw recruits to the Austrian regiments. They used this opportunity to dispose of local minor offenders, vagabonds, peasants with rebellious nature and similar characters.

A great part of the burden also fell on the shoulders of peasantry; their sons were often forcibly recruited to serve in the ranks of infantry. It was perhaps only too natural that such ranks lacked much in enthusiasm, discipline and necessary military drill.

It was felt among the leading circles that something has to be changed. The recruiting system should be more fair to villagers, the burden should be more evenly distributed, and that a qualitatively better “human resources” should be used in the future; preferably even to create a bond between a soldier and his regiment. And as a first step of achieving this really enlightened position the Konskription was ordered.

The patent from 10th March 1770 proclaimed that during the last war, many of the subjects were removed from their trade, lands, from their wives and children to the military ranks. It is the intention of the monarch that a more just and fair system should be created respecting positions of tradesmen and farmers, who should not be removed from their lands along with their only sons, only daughter’s husbands, etc. And for this purpose the general conscription was declared.

Great military and administrative action had begun, and the wheels of bureaucracy started to turn.

Getting Ready
Preparations started immediately. Parish priests were requested to announce the planned conscription during sermons. They were also obliged to prepare excerpts from the parish registers listing all inhabitants of each village. Meanwhile the commissions were appointed – several in each district. Every commission had representatives from the military and from civil (district) administration. They were accompanied by two or three scribes. The route of each commission was carefully planned; there were rules for that as well. And of course – most importantly – the paint and brushes were provided.

The planning was so meticulous that it was even said that it is the military part of the commission which had to provide the paint, however the expenses for that and were to be paid by the civil branch. The paint had to be black oil paint universally. The only exception was Vienna which numbers were to be red.

Also the rules for the future military drafts were suggested. What was important for our village ancestors? In the future the owners of the farm were exempted from the recruiting. So were their only sons, or only daughter’s husbands. Generally the heirs to the farm had the privilege of exemption; when there were more sons it was usually the youngest who in the 18th century inherited the farm.

The commissioner came to the village. Furnished by the extracts from the church books, they were  supposed to interview all the house holders and check whole family and other people living with them. They started with the first house on the road entering the village on their planned route. They interviewed the holder and carefully wrote his name down under the newly provided house number.

They asked about his sons who were also written down with full names, not only those living with him, but those absent as well. The military commissioners were supposed to see by themselves the men folk one by one, assess their ability to serve in the ranks and wrote it down. The women were not listed by names, only number of them were entered into the official file. The officers were also assessing the horses, the draft animals; how many of them, how old, how strong.

Meanwhile the scribes or soldiers attached to the commission painted black number above or on the doors. Leaving no space for discretion, there was also instruction that there should be written “No”, with capital N and the O in upper index, and that the numbers should be Arabic, definitely not Latin ones (123 vs I, II, III).

During interviews the commissioner met various complications. Sometimes the father was concealing his sons, not trusting any officials. However, officials were able to get the truth by combination of threats, persuasion and confrontation with information provided by parish priests in the extracts. What was much more confusing for many of the commissions traveling through the countries were names.

A Name, but whose?

The commissioners and the administration were for the first time confronted by the reality of name ambiguity in many areas, Southern Bohemia for example. When interviewing a farmer they were expecting to meet for example Kačena but the farmer proclaimed himself to be Houška.

This notorious multiplicity of names in some Czech (and probably other) regions rammed the neat logic and simplicity of the task. How would the lists look like when the father is using a different surname than he had in the baptism record? Or when his sons had different family names? Oh, be cursed those household surnames (Grundnahme, jméno po chalupě nebo po střeše)! There was no room for such mess in a rationally run empire.

A new decree was issued in December 1770. It was ordered that the house owners were to keep the numbers on the houses visible and noticeable under fine of 9 gold coins. Also, the willful removal of such was strictly penalized. What’s more, all subjects were ordered not to change their surnames according to the household names, but had to keep the given name and surname given at baptism.

Thus, for the first time some kind of official regulation for name usage was published. Otherwise, multiplicity of names would ruin all efforts invested in the conscription. How could the military act when the names in their lists would be so vague, or worse numbers were removed. The State needs order, system and logic. And it had to be established.

So along with house numbering we can witness more importantly beginning of a new trend – rules for surnames. It took many years and couple or additional laws before at least in the official use the awareness of one, official name prevailed.

And the house numbers? Well it seems like the numbering was secondary product of much greater process. At least at the beginning they served only as useful tool for keeping data in the order.

So, how many of them?

If you are interested in the outcome of the said allgemeine Seelen-, Zugviehes- und Häusebeschreibung, the results were as follows:

This being a blog for Czech and Moravian genealogy:

That is what happened in the years 1770 and 1771. The house numbers are still used and in many places the numbers are still the same as they were numbered 240 years ago and they serve today. As a bonus to this dry history I would offer hints related to the numbers. Sometimes when searching in the church books you find the right name but then you say wait a minute, it is different house, what has happened? Well, many things could happen, but don’t panic.

It was not unusual that the numbers of houses were rearranged (very often in the in the early years of the 19th century), houses were re-numbered. It happened in a lot of places, for unknown reasons by unknown pattern. In such a case the priests were usually using for a certain time both numbers – new and old – in the books. Or they at least made a note that from now on they would be using new numbers.

It might also happen that a farm was split in two. For example in the past one of my ancestors had ceded half of the farm to his elder brother. It was also with a house belonging to the farm. This house got its own number. Or your ancestors built new house on the farm, e.g. a cottage for retired parents or a sibling; again with a new number. In all these cases your ancestors stayed to live on the same place, though the “address” is different.

Examples from the baptismal register Činěves 5

1. Priest’s note stating that from now on the new numbers are written in the column marked “Haus Nro.” 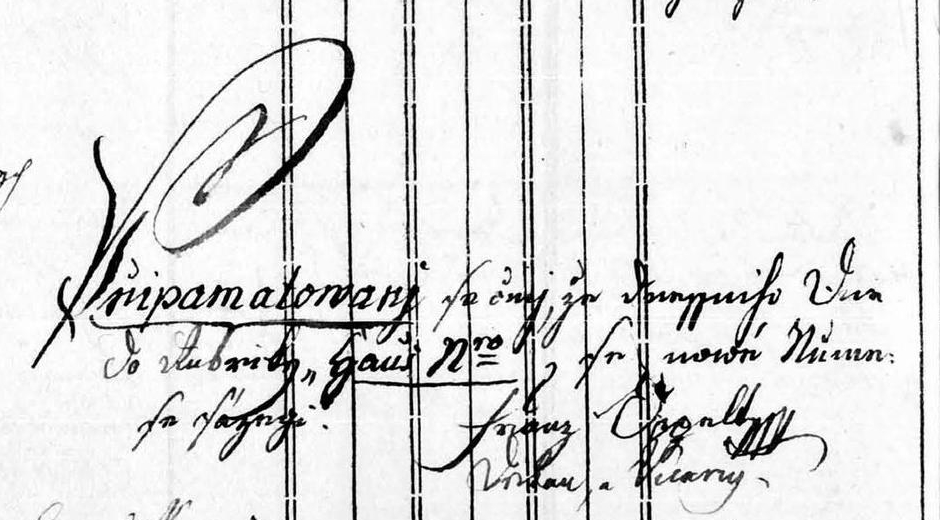 2. Example of both numbers in the entry – old and new number of the house 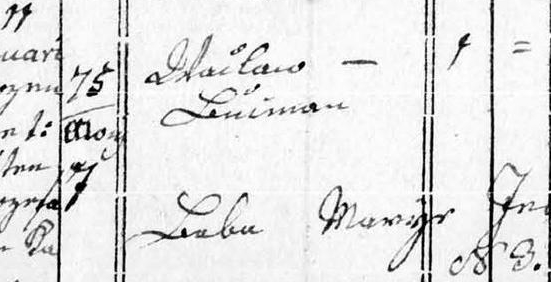 3. Example of entry where it is not specified which number is old and new. You have to check other entries and compare it to previous numbers. 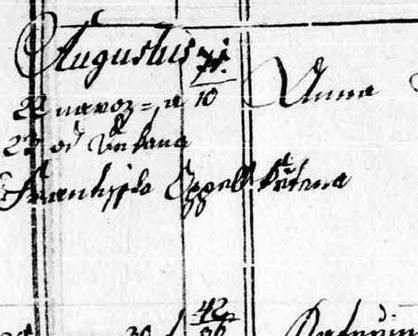 4. The original court decree of December 1770 prohibiting the removal of numbers and ordering that the names should be kept. 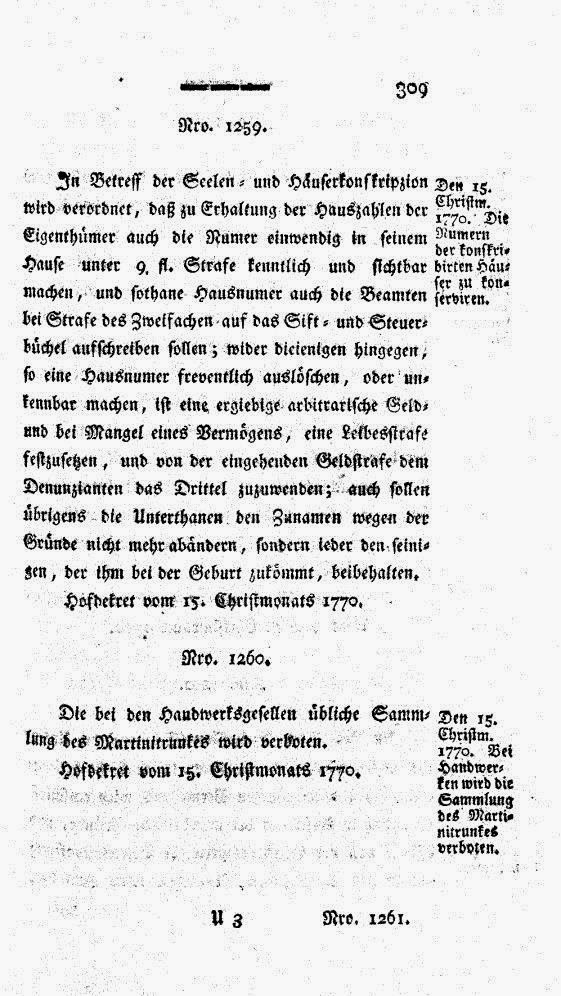