I knew that 19th-mid 20th century Catholic cemeteries (and perhaps some modern ones too?) had stringent rules about who was allowed to be buried there. My friend from West, Texas (a predominately Czech community) pointed out something to me that was really interesting.

In her own words:

As I have traversed through many cemeteries over the years in search of my distant ancestors and several predominantly Czech cemeteries surrounding the very Czech town of West (like Penelope, Tours, etc.), I stumbled upon an unusual phenomenon.  It is not unusual to find a few graves planted way up against the back fence that encloses the cemetery….right on the border line…. very separated from all the other graves. Curious!  There is plenty of room for those graves to have been located more favorably (without all the weeds that typically grow along a fence) and certainly in a less constricted space as none of these older cemeteries I’m referring to are “full”.  Often there will be just one, lonely, sole grave there (no family around it) and sometimes the headstone does not even have a complete entry on it (e.g. the name and birth date are etched in but the death date may just state “June”, as if the engraver just simply stopped).  Often the grave may not appear cared for…..rather just kind of ‘abandoned’.  Why such a location?
Upon inquiring I learned that it was a common practice (long ago – late 1800’s early 1900’s) to bury such persons in ill-favored positions if some act had rendered them decidedly un-Christian as a way to “separate” them from the people buried therein that were considered to have lived the Christian principles of the Catholic religion….. a way to “disassociate” with the reprobate, so to speak, WHILE still allowing the poor soul a burial inside a Christian cemetery (barely) – hence “on the borderline”. I will tell you of an example that came to light in my research for one man’s data.
I located the man’s grave – as mentioned above – just barely inside the boundaries of the cemetery, all alone.  My inquiries led me to a gentleman in town that knew the story since it occurred several generations ago. The deceased had come home very drunk, struck his wife with a lethal object and, mistakenly, thought he had killed her.  Upon coming to his senses (seeing her in her pool of blood), he went out to the barn and committed suicide.  By the grace of God, the wife recovered.  Now fast forward….
During the special Centennial newspaper printed to mark the 100th year of publication, a picture of that family (without the story) was reprinted, hence, why the living gentleman took the time to explain the story to me.  I actually think I may have located the wife’s grave which is in a completely separate cemetery about 25 miles away.  There’s conflicting examples – some Catholic Church cemeteries would NOT allow the burial within it’s borders considering suicide disgraceful, not representative of the “faith”,  just un-Christian while others took a little more lenient stand and placed the grave along the back fence…. a compromise.
This just goes to show that it might be worth going to the gravesite, or at least seeing a map of the cemetery, because additional information about the location of the grave within the Catholic cemetery could be a clue about something that happened in their life. You might begin to wonder what they did during their life, or perhaps how they died.
I ran into a very sad situation in my own family. Here is the 1927 obituary for František Kruppa Senior (here’s a direct link to the image of that newspaper):

Old Settler of This Section Passes On

Mr. Frank Kruppa, Sr., an old settler of this section, died Thursday night of last week at the family residence between this city and Schulenburg. The funeral took place Saturday morning at 9 o’clock at St. Michael’s Cemetery, this city, Revs. Szymanski and Anders officiating in the presence of a large assemblage of mourning relatives and friends.
Mr. Kruppa was born March 25,1854, in Czecho-Slovakia; died Dec. 1,1927; came to this country in 1882; married Miss Jenovefa Sumbera, and to this union thirteen children were born, of whom eleven survive, as follows: Frank J. Kruppa of Smithville, Joe Kruppa of Schulenburg, John Kruppa of El Campo, Richard Kruppa. of Holman, Edmund Kruppa of El Campo, Mrs. Frank Lacina of Schulenburg, Mrs. Henry Mosizek of Jourdanton, Mrs. Rud. Bacak and Mrs. John Baca of El Campo, Mrs. John Krecmer of Weimar. Mrs. Wm. Ball of Temple, and two brothers, John Kruppa of El Campo and Ludwig Kruppa of Skidmore.
Mr. Kruppa was a hard working, industrious, successful farmer, a good husband and father, ever proving himself a true friend and neighbor, and was held in high esteem by all who knew him. His death is deeply and sincerely deplored by a large circle of friends throughout this section.

Nothing in this obituary indicates anything about a suicide. But then, I found the death certificate: 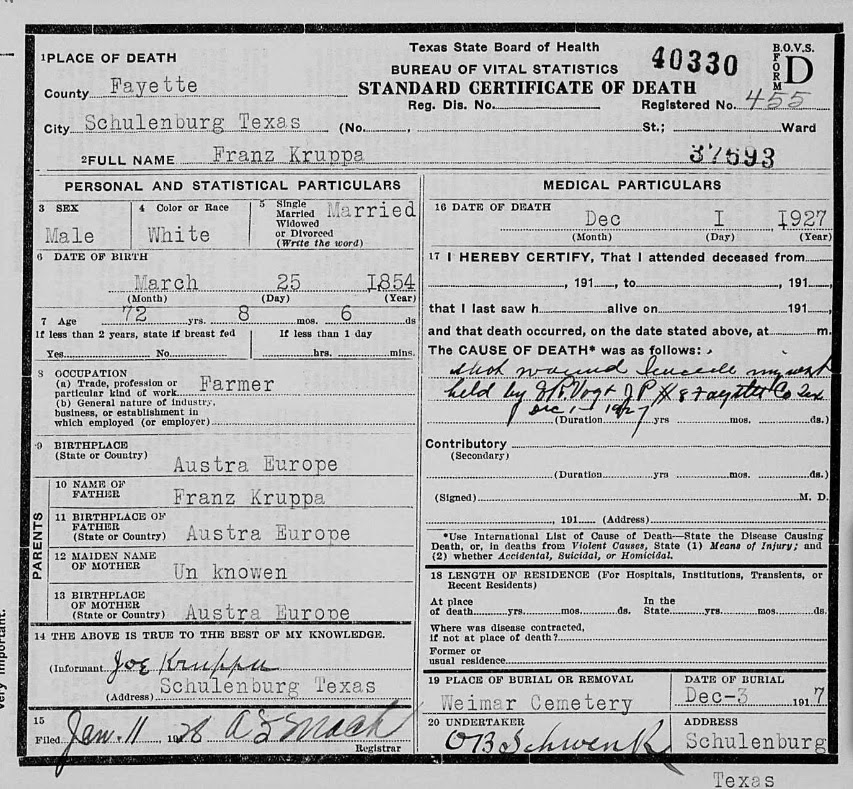 In the section for cause of death is written:
“shot wound suicide inquest
held by SR Vogt J[ustice of] P[eace] #8 Fayette Co[unty] Tex[as]
Dec 1 – 1927″
Clearly, I need to find the inquest records. What would cause an almost 73 year old man, who apparently was well loved by his friends and family, a man with 13 children – to commit suicide? He was buried in St. Michael’s Catholic Cemetery in 1927, when Texas Catholic cemeteries were strict about who could or could not be there. Was there some sort of cover-up? Was mental illness involved, and the Catholic authorities at the church lenient because they knew he was not “at fault”? Or was it not really a suicide at all, but just an accident, and marked as such because self-inflicted death is technically a suicide?
I wish I knew where in the cemetery he was buried. This might tell me more about the situation. If he were buried on the family plot, I would probably be more apt to believe that either the label “suicide” is incorrect and the situation was an accident, or that mental illness was involved so he is not technically “at fault”. But if he was buried way off to the side of the cemetery, perhaps I would be more inclined to accept that it was in fact an intentional suicide, though mental illness might still be involved.
Regardless of how or why it happened, I still find it very sad.