I found an interesting article about House Numbering on wikipedia, with a whole section for Czech House Numbers.

There are currently at least three kinds of house numbering in the Czech Republic:
Popisné číslo – This is the “old” or “descriptive number.” Maria Theresa ordered the first descriptive numbering in 1770-1771. According to the article, “The series was given successively as the soldiers went through the settlement describing houses with numbers. Thereafter, every new house was allocated the next number sequentially, irrespective of its location.
evidenční číslo – This is the “registration number.” It is used for makeshift and “recreational” buildings, like weekend houses. They follow a different numbering series from the popisné číslo.
Orientační číslo – This is the “new” or “orientation number.” They are arranged sequentially, unlike the popisné číslo. Buildings on the corner or with more than one front can have more than one orientační číslo. Renumbering according to a sequential order started in 1805-1815, and again in 1857. However, this was mainly confined to the larger cities.
For the *most* part, house numbers in small villages in the Czech Republic have been relatively static. This means you can find your ancestor’s house on a modern day map by using its “old” or “descriptive number” (popisné číslo). Here is how.
First, you have to know the house number. All parish records post 1770-1771 have house numbers, and they are usually accurate. Beware though – human errors can creep in! It is best to gather multiple records as a body evidence that your ancestor lived in a certain house number.
Once you have the house number:
>> Go to mapy.cz
>> Type # [house number] [village name] in the search box
>> click the search button that says, “Vyhledat na mapě”
>> On the side, a box will probably pop up that gives you two options: the č.p. (číslo popisné, or old number) or the ev. č. (evidenční číslo, or new number). You want the č.p. Click that option.
>> There you go! 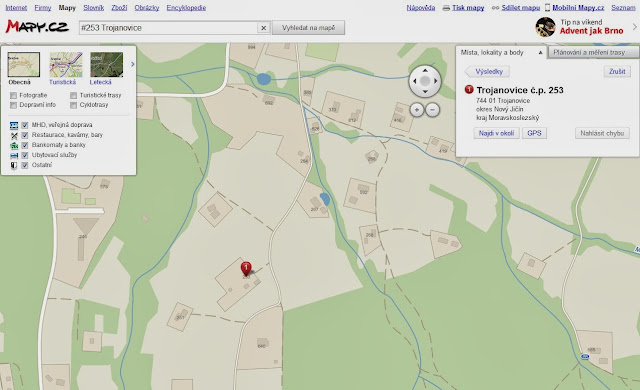 If you want to take it to the next level, open up google maps and find the same location on street view. Many streets in rural Czech villages have street view available. It is really cool to “drive” through your ancestral village.
It would be even cooler to go there someday!!!!!