Update: A very kind fellow Czech researcher emailed me with a transcription of the word I didn’t understand. I feel kind of depressed that I only got one letter out of six correct on that word. But I am humble enough to admit I made a mistake, correct it, and allow others to learn from the whole process.
So, what is an inweib? I found an interesting answer on the Bavarian genealogy forum. Basically, it’s a female hausler. A woman who does not own property, but works on someone else’s property in exchange for food, clothing, and shelter. It’s not a bad position necessarily.
I had always thought that “hauslers” were land owners. Then, I started learning more about Czech manorial laws and I realized that in no way did most of the people actually technically “own” the land until well into the 19th century. From the above site, I learned that hauslers were not really the land “owners”, but tenants who worked on the land. Hired hands. My understanding is that this class of people was not the poorest, but they had high rates of immigration because their situation in Moravia was not promising enough to outweigh the risk of leaving. I could see why people who didn’t have the possibility of owning land would find the lure of huge tracts of fertile east Texas farmland extremely appealing, especially when blown out of proportion to the point of fallacy by the immigration agents and other interested promoters.
A huge percentage of my Czech ancestors were hauslers. I’m so glad that I posted this question, and learned something from it.
I really think the person wrote “jnweib” but that would be consistent with what I know about Czech. “j”s and “i”s are sometimes mixed together in older Czech (or Czech-German, which it seems that this is). I also see now that what is written is “passekers”, which does mean “passekař.” I also don’t know why he wrote “eheweibes” instead of “eheweiber.” It could just be an error.
As I was working on some of my own family history, I came across a word that I really don’t understand. 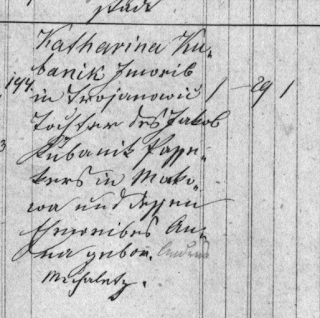 This is the bride’s entry in a Trojanovice marriage register. The marriage took place 9 February, 1863.

Katharina Kubanik, jmoril in Trojanovice, daughter of Jakob Kubanik, pasekař* [farmer, see below for details] in Morkowa [I will need to get out my gazetteers and figure out where this is. I haven’t done that yet.] and of his wife, Anna, born of And[r]eas Michaletz.

I have no idea what “jmoril” means.

No other woman on this page has the descriptor.

These records usually follow a set pattern. I feel confident that this word describes something about her; her status, her occupation, or something else about her.

I feel fairly confident that what is written on the page is “jmoril.” Maybe it is “j moril” with a space between the first two letters. The “j” looks exactly like the beginning “j” in “Jakob”. The final “l” might be a “c”, but I believe it is an “l.”

I click on “toiled” and the other options are, “toiled, bate, withered, tormented, plagued.” What could this possibly mean? Was Katharina Kubanik someone who was sick in Trojanovice? It seems unlikely. Did she “toil” there? Was she a servant of some sort? And why is there an extra “j” stuck in the front?

Katharina Kubanik is 29 at the time of her first marriage, which is significantly older than is typical of the 1860’s. Generally, Czech women in the 1860’s married between the ages of 18-24, though as young as 15 is pretty common, too. The youngest I have ever seen is 14 and 11 months, one of my great aunts!

Since Katharina is so much older, it is highly likely she has some sort of occupation. I feel fairly confident that “jmoril” describes her occupation, as opposed to her birth status (legitimate? illegitimate? I learned recently that there are many words for almost every conceivable – no pun intended – situation). Though, it is possible I am wrong.

I tried consulting a 19th Century German-English dictionary. It wasn’t helpful either.

So, now I am giving up and asking the blogosphere. Do you know what “jmoril” means?!

*A pasekař is a farmer who cleared the trees of the forest, usually on a hill, and turned it into arable land. Landlords allowed the serfs living on their property to do this. This happened when there was no possibility of the person obtaining land in the more desirable valley lands. This farm is called a Paseka, and is typical of Eastern Moravia. Many Czech immigrants to America were from this class of farmers; the prospect of land ownership was a huge motivation for their immigration. See this site for more details.