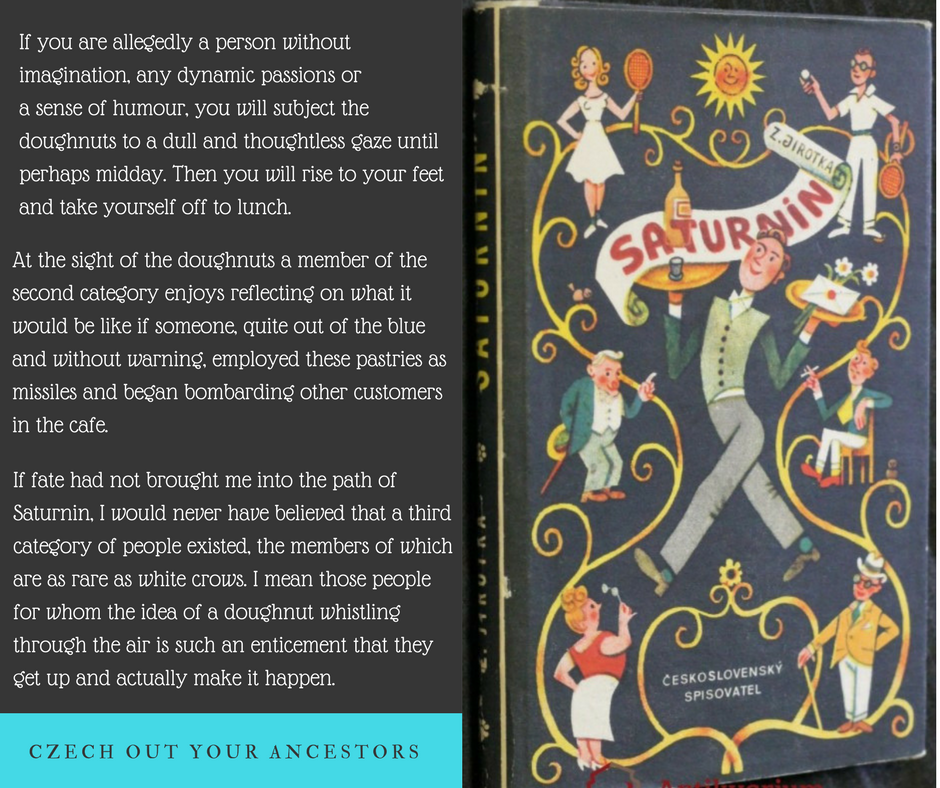 This was one of the most enjoyable books I have ever read in my life. Literally.

It’s the story about a shy, unexciting man in his thirties (he is unnamed in the book but in the miniseries his name is Jiří Oulický) who hires a “Gentleman’s Gentleman” named Saturnin, whose personality is a hilarious combination of fastidiousness and mischievousness. The story mostly centers on a two-week trip the main character takes with Saturnin to his grandpa’s house in the country and the hilarious small adventures that befall everyone involved.

The other main characters are the grumpy retired grandpa without heirs, the opinionated philosophic bachelor Doctor Vlach (in the English translation he is Doctor Witherspoon), the clever love interest Miss Barbora Terebová (in English Barbara Basnett), the obnoxious money digging widow Aunt Kateřina (in English Catherine), and the oily pubescent cousin Milouš (in English Bertie).

I haven’t quite finished watching the miniseries yet, but it is super enjoyable.

Perhaps not quite as enjoyable as reading the book aloud with my husband, though. We can hardly make it through a paragraph without breaking out in fits of laughter. Even though the story itself is pretty funny, it’s mostly the writing style and the way the story is told that is so funny. And the side rants, especially by the Doctor.

For example, at one point he goes on a rant about how nowadays a shoemaker must call his place of business something ridiculous like Manufacturer of Footware.

“We read the sign and at once translate it mentally into simple common parlance. Gentleman’s Fashion Emporium, that is surely a tailor’s. Designs, Decorations, Interiors, that must be a house painter. Manufacturer of Iron Structures, that will be a small-time fitter with a single apprentice, because if he had two that would make them an Amalgamated Engineering Works or some such title. Tar Production Plant – you would hesitate on that one. But don’t be confused, this is our well-known friend the Master Slater, and the tar products which he needs he buys from a real factory. I happen to know him.” (Jirotka, Zdeněk, Saturnin, 29)

This book pokes fun at some issues that are very relevant in today’s modern world, even though the book is over half a century old. I especially loved the rant the Doctor goes on about novel writers and how terrible they are and why. That had me nearly crying from laughter, it was so funny, especially in contrast to the story Aunt Catherine had just told in the previous chapter.

In the book, the love interest Barbora is actually a clever person with a funny sense of humor and personality, not just an object of desire, which was a breath of fresh air.

I think if there’s a theme to this book, it would be storytelling. Nothing especially important happens plot-wise, and there are many, many tangential stories told throughout the book by each of the various characters. The book itself is kind of like an exercise in storytelling. And it is very, very satisfying – at least it was for me. I didn’t foresee the twist, the ending, or the final ending, so it was extremely pleasurable to read.

The book was completely clean and still written for adults. That’s a really difficult combination to find nowadays, which made the book all the more enjoyable. I do not really think a teenager or child would enjoy this book as much as an adult, simply because the humor is so tied into the way the story is told, as well as life experiences that you don’t have as a younger person. It might be too subtle for an adolescent, and frankly, children just wouldn’t get the humor. But reading it as an adult was fantastic.

By the way, the Czech version of the novel is 30% fewer pages, simply because of the nature of Czech as a synthetic language. The audiobook version in Czech is good but the reader goes very, very fast. I have to listen several times in order to catch what is going on. By contrast, the miniseries version doesn’t have especially fast dialogue. In fact, most of the audio in the miniseries is just funny Czech instrumental music with lots of tubas.

The casting is in the miniseries is absolutely perfect. And as I watched it, the setting was exactly how I imagined it. So that’s some excellent translating by Mark Corner!

While reading the book, it occurred to me that this would adapt almost perfectly to the theater. I wonder if there is a play version. It would be fun to see.

In summary: I highly, highly recommend this book. I am sure I’ll reread it in the future. A word of warning: if you take it to the gym and read it on the treadmill, you will get some funny looks when you laugh out loud not once, not twice, but almost straight for 10 minutes!

1 thought on “Saturnin by Zdeněk Jirotka”