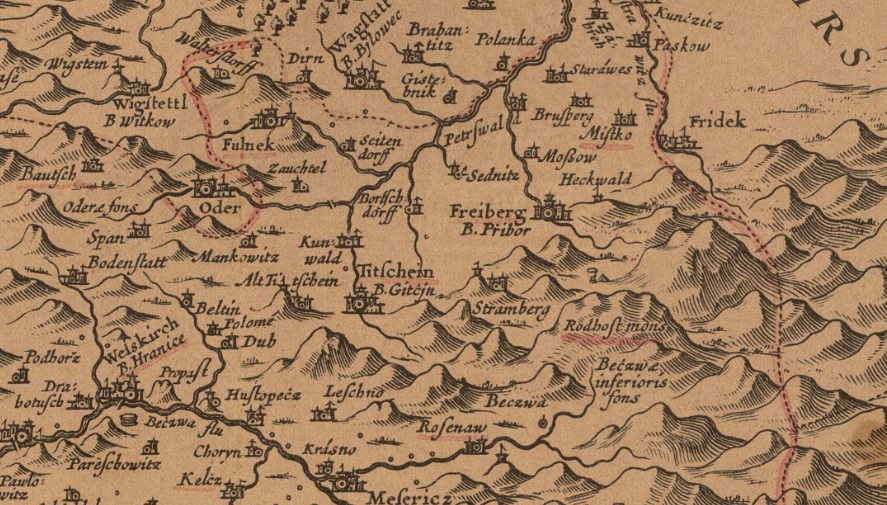 I saw in the footnotes of a book about Frenštát that it didn’t even make it onto Jan Amos Komenský’s 1633 map, no doubt having been destroyed during a siege during the Thirty Year’s War.
Well, that author was correct. It’s not on the map. 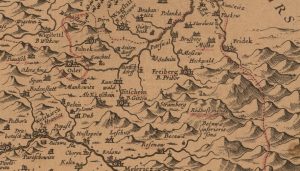 Where are you, Frankstadt?
I was curious to find out if that was true, about it being destroyed during the war. And at the same time, I was trying to research something completely different which required me to figure out, “What is the oldest land book in Frenštát?” I found it with some help, but then I was skeptical and decided to search again. And that’s when I found this!
This is a history of the town. I guess it’s a kind of a chronicle, but not technically a town chronicle. It was really interesting to read some of what the people lived through. Someday, I would really like to find out if these were my people that lived through it. I think so, but to be able to prove it…
Anyway, here are some of the first entries, with more to come I am sure. Thanks to Lukáš for helping me read them.

6 January. Mansfeld raided the town of Frenštát and plundered the city. And he robbed the poor people of everything, [and] he has incurred damage of thousands [of unspecified currency unit].

Kostelní kniha, fol 5
Léta páně 1646 dne 6 7bris. Švéda a lid [something]  zlodějský na úsvitě vpadnuvše do městečka Frankstadt kde co bylo všechno pobral lidi do naha zvlácel [mor]doval, za mnoho tísic škody učinil. Jejichžto duše za to propůjčí Pán Bůh všemohoucí království nebeské. A Švedskym peklo horoucí.
On the year of our Lord 1646 on 6 September. Swedes and thieves descended on the town of Frenštát at dawn where they were dragged until naked [by horses?] until they were slain, and inflicted damage of thousands [of unspecified currency unit]. The Almighty God awards to their souls the Kingdom of Heaven. And to the Swedes a fiery hell.