No, seriously…how should I record the given names of my Czech ancestors?
I used to think that the only way to record a given name was strictly by what was written in the record. I even went so far as to claim that any deviance from this method was “fiction.”
Let me clarify. I am not talking about how to transcribe a name from a specific record. I’m talking about how to choose which form of a name to use when I assemble and correlate all the records together and record a person’s identity in my own database. Should I record my Czechs with their German names? Should I record my Czechs with their Czech names? Spelling wasn’t standardized until the mid-19th century, so which spelling should I use?
Please note: I still believe that most of the time, most researchers are better off just recording their Czech ancestors by the name listed on one of their important records, for example, their birth record. I am not criticizing researchers who choose to record their Czechs this way.
However, my opinion about how I will record my own Czechs has slowly shifted over time. I see an increasing importance in knowing and preserving their actual identity. All my Czechs were either from the Beskidy mountains (Wallachians) or from the villages around Ostrava (Silesians and Moravians, depending on which side of the river their village happened to be).
It is really important to me to tell their story accurately.
They weren’t Johann. And while maybe to their close friends and family they actually went by the diminutive Honza (or Honzík, Honzíček, Jenda, Jeníček, Jeník, Janíček, Janek, Jéňa, Ješek, atd.), the Czech form of their name – Jan – is a better representation of their identity because they spoke Czech, not German.
Franziska? No, she was Františka. Wenzel? No, he was Václav.
My Czechs were Czech, and I should preserve their Czechness in how I call them.
Here is how I came to this conclusion:
Let’s pretend that history had been slightly different, and Texas became an occupied Mexican territory. Let’s say that the President of Mexico declared that all the names throughout the land should be recorded in Spanish. My parents are native English speakers. I was born in Lubbock, Texas. My English-speaking parents named me Katherine Elizabeth – BUT my official birth record lists me as “Catalina Ysabel.”
Perhaps my official government ID, my school report cards, census records, etc. might list me as “Catalina Ysabel.” But does this name really do justice to representing my identity?
No.
Then again, nobody has ever called me Katherine, not even as a very young girl. I have always been Kate – and by the way, I am not and never will be Katie, which is a perfectly beautiful name, just not on me!
But is Katherine closer to Kate than Catalina?
Yes.
How will my descendants 200 years from now know what to call me when all the records that remain of me are my official government records*? Will they call me “Catalina Ysabel” or “Katherine Elizabeth”? Does it really matter, since the name I actually used is “Kate”?
It does matter. My parents chose “Katherine Elizabeth.” I am an English speaker. It is a part of my identity. If my descendants called me “Katherine Elizabeth” it would make me smile, because that is the official name my parents chose for me. “Catalina Ysabel” adds a political layer to my identity that was not there before. It distorts my actual identity. It does not preserve my story.
Let’s pretend that the socio-political problems in Texas were so terrible that they drove my parents to emigrate with me and my brother and sisters to Estonia. In order to assimilate into the community, we all assumed Estonian names. My name on the official documents became “Katariina Zabel”. But maybe friends called me Kadri. My parents might still have called me Kate at home, where we probably would continue to speak English for at least one or two more generations.
200 years later, my descendants find me listed on many different official government records: my birth record in Mexican-occupied Texas where I am listed as “Catalina Ysabel”, and all my other government records in Estonia, like my driver’s license, my diploma, my interstellar-space passport, etc. On these other documents, I am “Katariina Zabel.” Which name do you think does a more accurate job representing my identity, the one on my birth record (when, because of my infancy, I was not even consciously aware of being present), or the one which I was actually might have signed myself? Maybe I didn’t use it commonly among friends and family, but if my own hand wrote my name, don’t you think that name is a more appropriate choice to use as an identifier for me?
Let’s pretend that 200 years later, Russian has become the dominant world language. Certainly, we can all agree that it would be categorically wrong for my descendants to record my name in Russian, as “Jekaterina Elizaveta.”
This final piece of the analogy would be like me, an English speaker, angliflying my 6th cousins’ names – people who emigrated from Czech-speaking Trojanovice to Portuguese-speaking Brazil. It would be wrong to do that. More to come about those guys in the next few months, by the way!
The question then becomes: how do you know what language your Czechs spoke, so you can know which language to record their name in your database?
Though you may not be able to ask your great x grandparents directly, you can start to find clues about the language they used by learning about the history of the region. Did your ancestors live in the Sudetenland? Was German a language which people spoke in that time and place? There are maps of German speaking regions, for example: 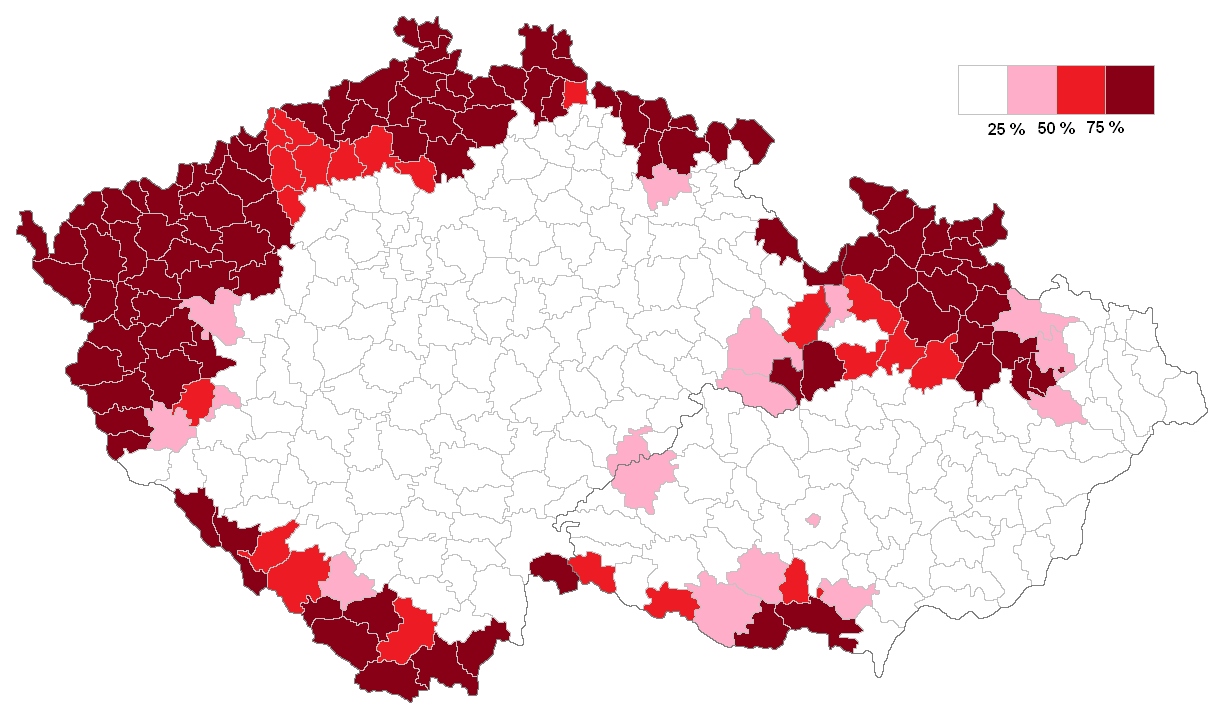 Wikipedia : https://en.wikipedia.org/wiki/Sudeten_Germans
Other hints might be to look at the language used in the matriky and land records over time. Did it consistently stay in German? Did it revert back to Czech in the 19th/early 20th century?
If you are lucky, you can find clues hidden in the signature of your ancestors. Did they sign their name in Czech?

Here is a great example of signatures from a late 19th century Frenštát marriage register. Notice that some of them also wrote their occupations, for example, the top signature of Frant Reček “suset Tkadlec” aka “soused tkadlec” or “citizen weaver.” Note that he even wrote his occupation in Czech. He did not write “Bürger Weber.”

A few pages later in the same marriage register, notice that there are three little x’s next to Martin Bartoš’s name. This represents his mark, meaning it was not his signature. Probably he was illiterate and could not write his name. But notice again that his occupation was written here in Czech as “tkádleč suset” aka “soused tkadlec”. He probably spoke Czech.
If you can’t find these clues for your ancestor themselves, perhaps you can find them for their descendants. If their descendants spoke Czech, their ancestors probably also spoke Czech.
I know that the spelling becomes the major limiting factor for most researchers. They look at the plethora of ways in which people spelled given names – both in German and in Czech – and they get so discouraged that they throw up their hands, pick a record (usually the birth record) and decide that will have to be enough. What is the difference between Waclaw and Václav, anyway?
Or perhaps the hang-up is because his name was never recorded as “Václav” on any official record; how do I justify recording him in my database in a way that does not exist in the records? If he spoke Czech before the Czech language assumed a standardized and codified alphabet, should his name be spelled with modern Czech standards and conventions?
If he spoke Czech, then I think there is a strong and compelling argument that yes, we should record our Czechs in Czech, because it captures their identity better. The onus is on us to find clues about which language they used and to document our conclusions.
I currently only use FamilySearch as my lineage linked database – and yes, I know that I need to have a static, closed system to record just my research – but frankly I haven’t gotten around to it yet. That is one of my genealogy goals for this year.
Anyway, I love how there is a way to add alternate names in FamilySearch. 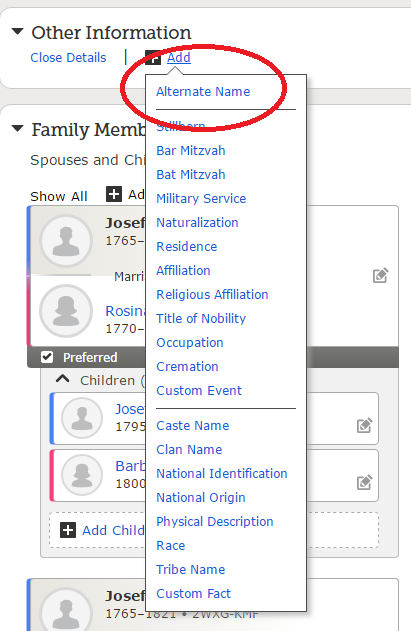 I think from now on, I will try to discover what language my Czechs spoke. I will then record my Czechs by the language that they spoke. I will also record all other name variants which I find under “alternative name.” I think this will give a more accurate representation of my Czech’s actual identity, while also recording the other spelling variations for future researchers to review.
FamilySearch always prompts users to enter, “reason statements.” “Why do you believe x is true?” I will also be very clear in my reason statements about why I believe they should be known by their Czech or German given name. For example:
“This village is historically a Czech-speaking place. This person’s descendants all signed their names in Czech (for example, here are some links). Parish registers and/or land records from the early 16th century for this place were written in Czech (for example, here are some links). Later 19th century records for this place were also written in Czech (for example, here are some links). Based on this person’s geographic location, this person’s descendants’ native language, and the linguistic reversion in the records from Czech to German to Czech, I believe this person was a Czech-speaker. Therefore, I believe a Czech name better represents this person’s identity. The standardized and official spelling for this Czech name today is such-and-such, therefore that is how I have chosen to identify this person in my records. Please note that all alternative spellings are listed under ‘other information’.”
Yes, I did just write this reason statement out so that I can copy and paste it into familysearch when I enter my Czechs by their names. I will probably start crafting reason statements tailored for each village and family. I know this is perhaps being a little bit over-the-top, but I think it’s really important to explain this name change logically, especially when no record preserved from their life records their given name in Czech.
What do you think about how to handle Czech identity? How do you name your Czechs in your own records? Why do you do it that way?
*This is not going to happen, because I will not only leave a sizeable footprint of online records (facebook, blogger), but I intend to leave a really awesome written legacy for my descendants in the form of an interesting, well-organized, indexed volume of journals.

3 thoughts on “How should I record the given names of my Czech ancestors?”