How do you document a Czech place name in Familysearch? This is a constant source of frustration for Czech genealogists.

Have you ever used Familysearch as a cloud-based lineage linking platform before? When you add a person in the tree, you have the option to select a location from a list of standardized places. This is the same system employed on Ancestry.com. The list is pre-set, but I don’t know anything about its provenance. Are they international political boundaries? And how do the lists deal with name changes over time?

For every Czech village there are about 5-10 various options in this drop down menu depending on which political regime was in place. They even differentiate between “Czechoslovakia” and “Czech Republic.”

In the past, when I was unsure which option to pick, I always just picked the name that corresponds to the CURRENT place. There were two reasons for this, if I am being honest with myself.

In Familysearch, I always try to edit the place name to include the house number, because those are so valuable. It is too easy to overlook them if they are buried in the notes. For some reason that I don’t understand, it will still select a standardized place name even if you add the house number.

First detail:  the conventional Czech way to write addresses is with the house number AFTER the village name.

It should probably be instead, “Trojanovice 102, Moravia, Austrian Empire,” because she was born in 1839 and neither “Austro-Hungaria” nor “Austria” existed yet.
But the real problem is that Moravia was never in “Austria.” It was part of the “Austrian Empire.”

Kaisertum Österreich was the official name for the Austrian Empire from 1804-1867.

There are tons and tons of these kinds of errors all through my family tree on Familysearch. I know it is a little bit nitpicky, but seriously, Mariana Janda was NOT born in, “Trojanovice 102, Místek, Moravia, Czechoslovakia.” I feel that correctly portraying the place names is a way that I can show that I value, respect, and actually KNOW something about the lives of my ancestors. Isn’t it?

For a long time, I have been wanting to make a list to Familysearch for them to add to their database of possibilities. Right now, I think “Moravia” is always categorized under some other giant national category. It was part of the Bohemian Crown Lands (Země korony české) and therefore it was under the Habsburg rule (which never had an official name!). But it had its own administration, Gubernium, parliament (zemský sněm), místodržitelství, etc. etc. It seems like Familysearch has arbitrarily chosen only place names based on their international “identity.” Why?

The question is what criterion for linking the village and the “state.” Moravia was part of the Bohemian Crown Lands, but it was also relatively independent for a very long time. In the 18th century, it was nominally still independent, but the administration of Habsburg Empire became centralized.

After 1804 it could be considered part of the Austrian Empire, and after 1867/8 Austro-Hungaria. 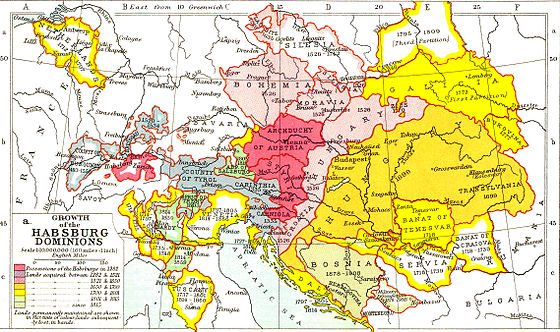 This is the same problem that is run into in trying to describe any German state. Is it Prussia or Saxony or Brandenburg. Prussia was an Earldom, part of it was in the Holy Roman Empire, part of it was in the Polish Kingdom. Later it was connected with Brandenburg and still later it became its own kingdom. It annexed part of Silesia, in 1871 in was part of German empire, after 1919 it was part of the Republic, later the Third Reich, later the Deutsche demokratische Republik (and part of the state was/is in Soviet union, Russia now).

This question has many layers. What is the state? Is the “state” defined (for this purpose) by the highest level of administration? If we use international law to define “statehood”, well, then Moravia was not even represented there and the jurisdiction should look like:
English: Trojanovice, Místek, Austrian Empire.
German: Trojanowitz, Mistek, Kaisertum Österreich

Is the “state” defined by its official name? It was only recently that “Czechia” was declared an official short form version of the name. Before that the only official name was, “The Czech Republic.” But Czechs hardly ever used it!

Is the “state” defined  by legitimity? For example, the Protectorate of Bohemia and Moravia was never officially recognized as a state entity by current Czech constitutional lawyers. They work under the fictitious pretense that Czechoslovakia existed from 1939-1945. Even though it did objectively exist; it had its government, administration and even a president.

The main issue is that what the “state” was called at any given time was actually not very important for people in villages. Until the abolition of feudalism in 1848, the most important jurisdiction for most people was the estate to which they belonged. It was at this level – the Estate – that a huge bulk of Czech records were kept. I do not yet understand the practical difference between a “panství” and “velkostatek.”

But then if we are to use the names that are used on the actual records, then we almost immediately leave the realm of place being defined by “state” and enter into places being defined by religious geographic boundaries such as parish and archdiocese when we start using parish registers. It seems that Familysearch simply does not organize places this way.

It seem really complicated to decide:

After we do this, it will be sweet sailing.
My next steps will be:
Maybe after that, we can start approaching other giant lineage-linking software behemoths. For now, let’s just start with Familysearch.
Maybe if we do a good job, they might allow us to finally reorganize the atrocious organization system (if it can be called that) for the Familysearch Czech Historical Records like Church Books, Land Records, School Registers, and Censuses.

1 thought on “Czech Jurisdictions in Familysearch: Part One”