Guest post by Lukáš SvobodaTranslated by Kate Challis and Lukáš SvobodaOriginal post found here
On the table lay two neat stacks of Martins and Jiřís sorted by their families. But it was not enough to merely know that “my” Jiří existed, which Martin was “mine”, and even his birthdate. After having spent so many years searching, I suppose I was not really satisfied. As the saying goes, appetite comes with eating. So, even though I really didn’t need to, I looked through other registers. I found the wedding of my Jiří to Kateřina Bezoušková at exactly the right time, before the birth of their first child. Jiří’s father was listed in the register as Matěj, and so the same old story repeated itself again: I would have to deduce from among several Matěj’s which one was mine.

My choices were Matěj and Kateřina, Matěj and Alžběta, and another potential couple Matěj and Voršila. This time, I used my gut instinct; I had excluded the Matěj-Vořsila couple because their first child was born in 1724 and their last in 1741, and so they could hardly have had a son old enough to marry in 1726. Actually, this was the same reason I ruled out the Matěj-Alžběta couple, though with less confidence. Their first known (to me) child was born in 1715 and their last in 1723. By contrast, the Matěj-Kateřina couple had their first child in 1705, and their last born in 1717. Their children actually were among some of the first known children in the Benešov region. But mainly, what stood out in favor of this Matěj-Kateřina couple was that when Jiří was married, he was described as the son of Matěj Šnajberk, master shepherd of the Ondřejovice sheepfold, while four out of five children from this couple were found born in Ondřejovice. In 1723, Matěj’s other son Matěj from Ondřejovice was married.

Marriage with a Dispensation

Still, I was more interested in the marriage record for Anna Šnajberková, the widow of “my” Jiří. Her husband had died in July of 1754. In December of that year, his widow married Jan Šnajberk, son of Jiří Šnajberk of Pomněnice! Lo and behold, I was suddenly able to link Anna to both the Jiří Šnajberk families. That was not all: the marriage record referred to a papal dispensation and that the banns were announced as, “one for three.” Usually the banns had to be announced three times, on three consecutive Sundays, but if needed, a dispensation could be considered to have the same validity as three banns announcements. They were dispensed from impediments of marriage of the “2 et 3 gradu affinitatis”, aka the 2nd and 3rd degree of affinity.

At that time, I was well informed about the meaning of affinity and contemporaneous methods for calculating its various degrees. It didn’t have so much to do with Anna, but rather the relationship of her first husband (my Jiří) to her second husband (Jan). Because they both had the same Šnajberk surname, it seemed they were most probably connected through the male line. It might look like this: 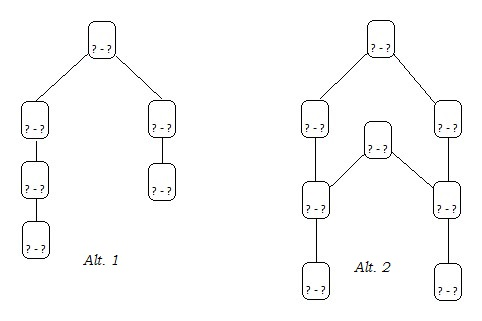 Alt. 1 shows a third degree relationship (affinity) mixed with a second degree relationship. Alt. 2 shows a theoretical possibility; instead of having a single common ancestor, they could have had two separate ancestors.
But in Alt. 2, cousin marriages are required which would probably not be dispensed. For this reason, I leaned more towards Alt. 1. When I entered the known family names into the chart, it looked like this:

In these two options, the common ancestor is either an unknown Šnajberk (alt. A,), or else Jan Šnajberk the centenarian (alt. B) with another unknown person between him and Matěj. Deciding between the two possibilities was difficult, nay, impossible.

I only had one possible clue: the birth years calculated from the data in the death registers. While the line of Jan-Jiří-Jan was totally plausible and mutually compatible with each other, I knew nothing about Matěj from the Matěj-Jiří line. I found only one death for any Matěj, in Žabovřesky, 1753, age 65. Thus, his birth would have been around 1688. But I still had a giant question mark as to whether he belonged to me or not at all. If he was “my” Matěj, then in Alt. A he would have been about 30 years younger than his brother Jiří (who was later the centenarian guy); unlikely, but not impossible. In turn, in Alt. B it was more difficult, if not impossible, to “cram” another generation between Matěj and Jan, so this Matěj probably does not belong to my family tree.

I finally gave up. I still greatly prefer Alternative A, but until I get more information about Matěj or older generations of Šnajberks, I just cannot get past it. It is a brick wall.

If I can’t have a centenarian, I’ll settle for the sabre stab-ee 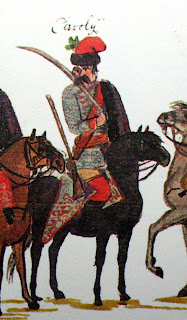 I confessed that I was really sad that I could not definitively add the centenarian Jan to my direct ancestors, even though I had made some connection. I wondered if Pavel, who was stabbed by the Hussar’s sabre, might also belong to the Šnajberk family. Wasn’t it be possible to connect him with my Jiří and thus piggyback onto the glory of his story?

I have had lots of practice sorting Šnajberks. Pavel’s widow was named Kateřina. She remarried in November 1742, less than a year after the tragic death of her husband. I had two Pavel-Kateřina marriages:

Unfortunately, neither of these records listed the father of the groom.

His identity is difficult to pinpoint. In 1726 he was a witness to the wedding of Bartoloměj Šnajberk of Pomněnice, son of Jan Šnajberk. In the period around 1722 the second Jiří Šnajberk and his wife Ludmila worked around Pomněnice (remember that he is also the son of Jan Šnajberk). So with much less certainty, I connected Jan (the centenarian heretic) as his father.

Before determining the identity of Pavel’s father (and their relationship to my Šnajberks), first I had to sort out which one was stabbed by the Hussar’s sabre in 1741.

In these situations, godparents and baptismal witnesses are always extremely useful. I made a list of all the children born to Pavel and Kateřina with their corresponding godparents. As I expected, you can distinguish two separate groups of people by their different witnesses, with only one exception: the first child, born in August 1722, had an unknown set of godparents who never showed up again later; perhaps this was because the child was born 2 months after the wedding, and it may have been difficult to find witnesses in their new residence.

The last piece of the puzzle
It turns out there were actually two Pavel-Katřina pairs (in 1734 and 1737, there were children born to both of the couples).
Paradoxically, Pavel Šnajberk, whose children were born in Ondřejovice in 1732 and 1734, was the second Pavel of Pomněnice because he also had children born before 1729 (and before the other Pavel’s marriage).
Children were born to Pavel in Myslíč since 1733, which corresponds to a 1729 wedding. One could expect that the first child would probably be born sooner than 4 years after the wedding, but I could not find it. Perhaps she had a stillbirth or a miscarriage.
I thought that in any case, Pavel Šnajberk of Myslíč was the one who married in 1729, his father was Matěj Šnajberk, and “my” Jiří was Matěj’s brother.

I have spent a lot of time on the Šnajberks. Over the past 7 years, as I have returned to them regularly they have served me with headaches, fits of rage, and disappointment. But I never asked myself, “why am I really doing this? Is this really needed?” Never did any such thought even come to my mind. Only now, when it’s “over” and I am beginning to draw up a history of that impossibly long search, have I begun to ask myself this question.

I do not even need to answer it, because despite every disappointment, in the end I was able to experience the reward of the rich joy of discovery and adventure. But for myself, and perhaps for other genealogists, I would respond to the question of, “Why are you looking for your ancestors, anyway?” in the paraphrased words of George Herbert Leigh Mallory. “Because [they’re] there.”