At this, the close of my first week of actually making a real and concerted effort to study Czech the language (though I have made several other really casual attempts before), I have to take a minute to write about a huge cultural difference that I have noticed: vykání vs. tykání.
Of course, this concept is not new to me. I lived for a year in France, after all, where on se vouvoie/on se tutoie. A huge difference in how it happens in France vs. v Česko: the ritual of moving from one to the other. It’s a slight nuance, but it totally makes me blush, and it is difficult to understand precisely why. 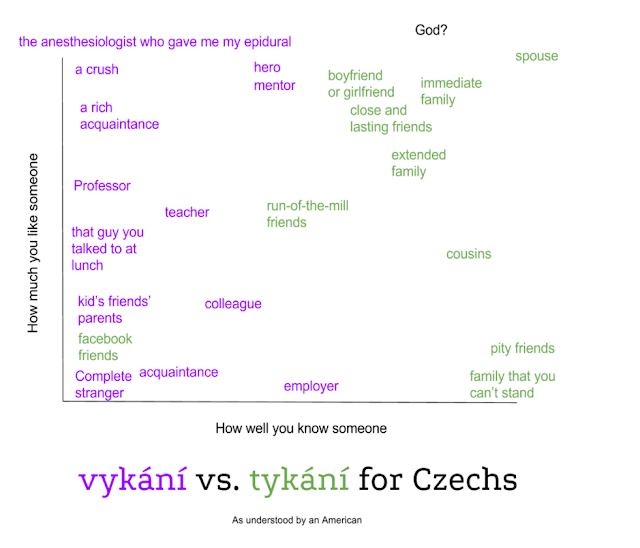 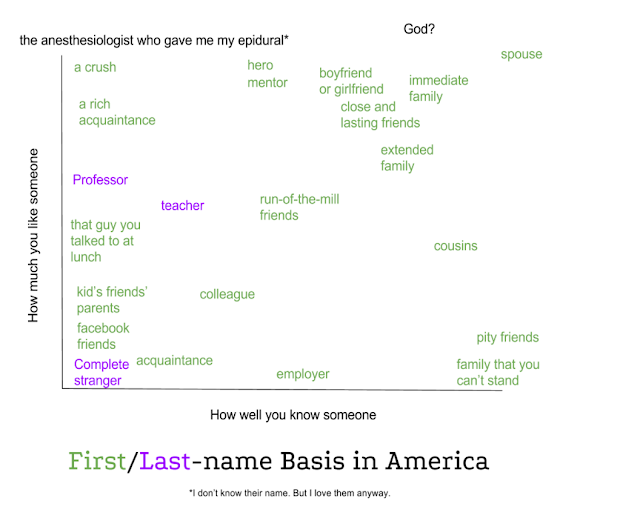 There is that thing in English with “thou”, which is a really interesting parallel linguistically, but practically, it has zero correlation. Also, obviously, we’re not talking about the vykání-ing of multiple people or the tykání-ing of children and family, but rather that elusive moment when a friendship becomes close enough to be tykání-able. Whereas in France, it’s a lot more casual and can be initiated by whomever, apparently in Česko, there are a whole set of rules regarding who initiates it. My source is 2 guys and 1 girl Czech, plus hoards of articles here, here, here, here, here and here. The more I read about it, the more I bite my nails in anxiety, hoping that I will not (or have not) screwed it up. It makes me blush.
But why the heck am I blushing!? It isn’t embarrassing for Czechs; it’s a cultural tradition. It’s just that in my culture, it is so, so, so utterly awkward. How can I say it?
Well, I’ll put it this way. It’s like the translation of Beauty and the Beast in Czech. Belle goes the entire film vykání-ing the Beast, until the very, very end when she says, “Milujě tě!” But seriously, even after their famous dance scene, they still remain at the vykání level of closeness (or should I say, distance). Perhaps this is because it is a fairytale, and relationships in fairytales have more archaic rules? I dunno.
Every Czech person I have asked says that the person who initiates the tykání-ing has to be the one with the “higher” social status, such as the boss to an employee, an older person to a younger person, and (most stressful of all for me) a woman to a man. (This is yet another example of how being male would solve some Czech-language learning problems.) I find it super fascinating that women are somehow “higher” on the social echelon. Or more respected, or something. In my culture, it is a really fine, thin line between chivalry and sexism, and women are totally measured on the same scale as men (which, IMO, is the ultimate sexism, and I despise this philosophy).
Truly, there really is absolutely zero equivalent to this in my American culture. Seriously. The Czechs explained that it’s like being on a “first-name basis,” but that might be a British English thing; almost everybody uses first names in the United States. Almost all the time. The only times I don’t are as follows:
Vykání/tykání ≠ being on a first name basis
(in American English) 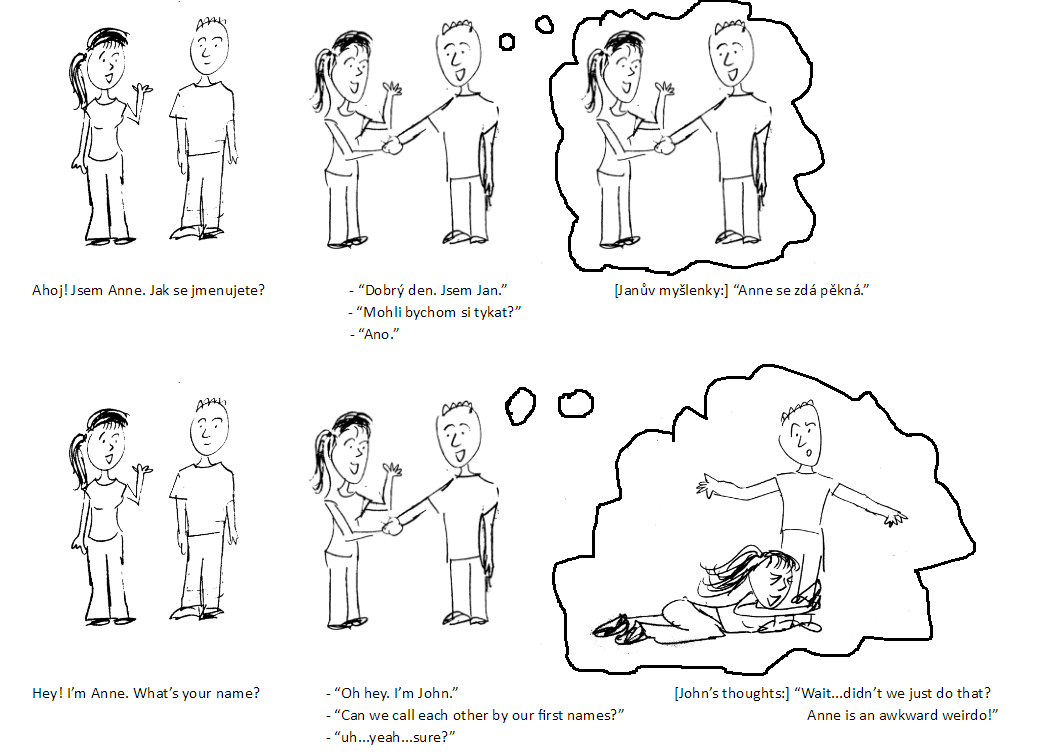 I cannot imagine any case in which I would not have called any of my bosses by their first name, even though we were always very formal. No wait, as a teacher, I called my fellow teachers and the principal “Mr.” and “Mrs.” Most of the time. But actually, not my immediate supervisor. She was simply “Teri.”
My most respected, loved professors in college, I call them by their first name. Mary, Kirk, Dil, Doug, for example.
If my children are in trouble, I call them by their full name. “Jane Elizabeth Challis, you come here at once!” “Daniel Edward Challis, you must NOT say potty words!” (another true life example)
In my culture, friends hardly ever discuss their friendship outright. If, for some awkward reason, you have to make sure that you really are friends, you would never put yourself in the position of being able to be refused. That is the weirdest part of tykání-age, in my opinion. I would just tell them that I consider them my friend, and let them do what they may with that meta information. It has happened to me in the past when one of my (female) friends told me that they consider me to be their “best” friend. Even though I did not necessarily reciprocate the sentiment, I agreed with her vocally. It would have been the ultimate rudeness not to. Did it change our relationship after that? I suppose it didn’t change very much for her; afterwards, I always felt slightly sad about the fact that she liked me more than I liked her.
I mean, never, never is it a normal thing in my culture to say, “hey, we’re friends, right?” or, “So…are we friends?” That’s just so weird and awkward it’s laughable. I remember doing this one time when I was in kindergarten, actually. I was petrified because I wanted very badly to know if Ashley was my friend, but I thought that to be friends, she had to tell me explicitly. So, with trembling knees and butterflies in my stomach, I approached her (another six year old girl) and asked, “Are you my friend?” She said, “Yes!” and went on eating her lunch as if nothing happened, and I breathed a sigh of relief and from then on decided that it was completely stupid to ask if somebody is your friend. Always assume that they are. If you don’t, you look and feel and sound stupid.
But this is not to say that we do not have “DTR’s” – (“Define The Relationship” conversations). It’s just that they are always reserved for romantic relationships. And it is the worst, most awful conversation ever. When you are dating a guy who wants to move forward and “be more than just friends,” but you, “don’t feel that way about him,” – the entire thing is awkward at best and painfully ugly at worst. Tears are shed. It’s never the same. But you don’t have a relic of that DTR forever tied to your language. Tykáníing, it’s like the virginity of conversation. “You can never go back.”
I am pretty sure that I made my fifth cousin, with whom I have been corresponding for about 5 years, who my husband and I visited, with whom I traveled on a 6 hour genealogical expedition to Poland, etc. burst into fits of laughter when I asked him this week if I should vykání or tykání him. He said of course tykání. I just want to make sure I’m doing it right. I respect him so, so much. And I don’t really know. I didn’t even really notice that this was a “thing” until this past week. It feels like that moment when, years after I had begun reading and transcribing genealogical records written in German, I realized that all the nouns were capitalized. “Oh wow. How could I be so utterly blind.”
I’m quite sure that I’m making a much bigger “deal” out of this than a native Czech would. It seems like if people like each other, they feel free to tykání each other, and it doesn’t have a deep meaning associated with it. Because it’s so meta, and because that is not a thing in my culture, it feels like it has deeper meaning than it actually does. Fearing that I will mess it all up, I think I will just stick to vykání most of the time, until I’m sure I like somebody. Better to be too cautious than end up coming across as vulgar and “easy.”
Questions I have about vykání vs. tykání

5 thoughts on “to tykání, or not to tykání…that is the question (for Czechs)”