I want to build on a previous post about affinity in another branch of my family tree, in which the issue of consanguinity, which we see in parish register margin notes, is not only an interesting curiosity, but also a valuable and often times the only clue in how to go forward in your research. I would also like to warn against one big and often misleading aspect involved with using dispensations for genealogical research.

At the beginning of the 18th century there are several families with the Fiala surname on the Lnáře Estate, many of whom were manorial master shepherds. Because of their mobility, it is virtually impossible to determine how and to what extent all these families were interrelated, and even how many there actually were. Anyone who has ever searched for ancestors with migratory professions knows what I mean; mobility tied to a profession is a genealogist’s nightmare.

My Fiala ancestors were particularly difficult to trace not only because of the occupation of the persons concerned, but also because the registers for the time period were missing, and it was not possible to follow even one single family line further back in the related parish register entries.

Eventually, though, this became a blessing in disguise in two ways: In the first half of the 18th century, the development of sheep farming on the Lnáře Estate increased the demand for professionals in the estate’s service by expanded sheep breeding. This did a little to allay this branch of the family’s innate itinerate nature.

A second fortunate factor was the dispensation in connection with a wedding in 1789. This made it possible to identify the next two generations of the Fiala family with relative certainty. On Tuesday, November 10, 1789 Martin Fiala and Marie Fialová, daughter of Josef Fiala, were married. Their surnames suggest that they could be related. This is confirmed by an entry in the register, when at their wedding the farář (rector) noted a “dispensation in the third degree of consanguinity.” It does not mean anything other than that the engaged couple were actually relatives, namely in the third degree of kinship; according to canon law, this constituted an impediment to the marriage, and therefore beforehand they had to be granted a dispensation to ever be able to actually be united in marriage.
Before researching Marie and Martin’s ancestors further, I knew that the name of Marie’s father was Josef, and I could reliably link Martin with his father Tomáš. But beyond that, it was difficult to continue. The marriage record of Tomáš Fiala was in the register that doesn’t survive (although, annoyingly, its index has!), and without this record I could not find the name of Tomáš’s father.
Whereas in peasant families, in this situation I would look first and foremost to the land records, where I would most likely find the name of the father and other family relationships, none of these search strategies apply to shepherd-folk. It was necessary to try another tack to determine the ancestral ties. I finally browsed through dozens of registers and listed every single one in which someone was named Fiala. Gradually, the list grew until there were about 200 Fiala names in various registry entries. A search through hundreds of pages of registers managed to lead to a record for the wedding of Josef Fiala, father of Marie (the aforementioned bride). His father was recorded as Václav Fiala.

CAUTION: Make sure you know which system of calculation is being used to determine degrees of consanguinity and/or affinity: by generations, or by birth. They are not the same!

The dispensation turned out to be a key and actually only useful information. And here comes the caution which I promised earlier: Armed with knowledge of canon law and Roman law, I calculated and reliably concluded that the engaged couple Martin and Marie had a relationship of uncle and niece (or aunt and nephew). But canon law returned to counting the number of degrees of kinship by number of births only in the first Code of Canon Law of 1917. Fortunately, I quickly spotted my mistake when I saw that kinship in 1789 kinship was calculated differently, and that the so-called Germanic system was in use then. This system calculates relationships by by counting the generations from a common ancestor. (Note: Each generation removed increases the degrees of separation. It is possible for the spouses to be from different generations, and the dispensation might include the details about each spouse’s degree of affinity.)
The break down is because so many words that we often encounter in various forum discussions on this issue refer to the current rules of canon law, and this can lead to the wrong conclusions, as it did for me then.
When the third degree of kinship is applied according to the Germanic calculation then the parents of both spouses – Tomáš Fiala and Josef Fiala – were cousins. Therefore, the grandfathers of both spouses – Václav Fiala and the as yet unknown grandfather of the bride – had to be brothers, and the spouse’s great grandfather was their common ancestor.
It looked like this: 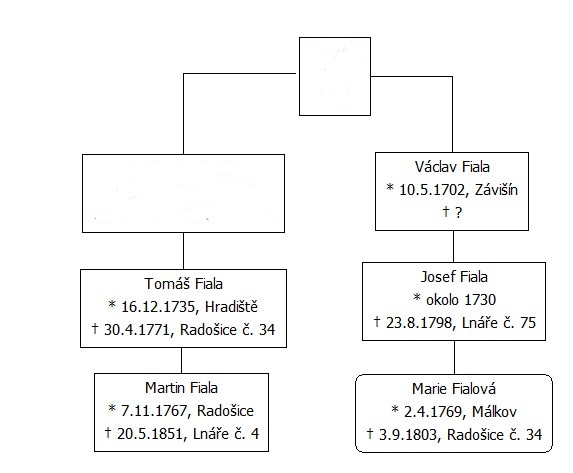 This is how they were related. 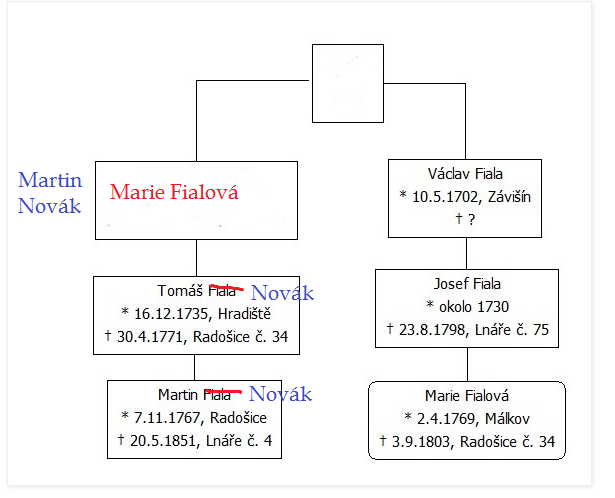 If the grandparents were not brothers, but instead brother and sister, then the surname would have changed through time, which it did not. 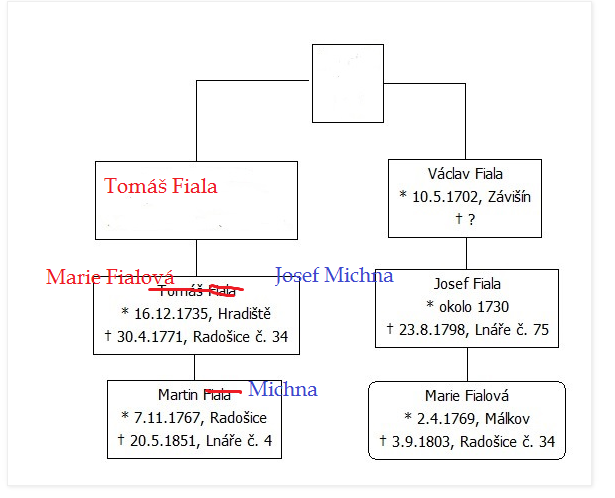 Although the surname could also have been lost here, it was more likely that it was not because a. there was not a lot of generational “space”, and b. the likelihood that the Fiala family that lived, married, and died in the same place was from the same common ancestry was already high.
Tomáš Fiala, according to his age at the death, was born sometime in 1735. In that year there was, in fact, one Tomáš Fiala, born in a family of Bartoloměj Fiala in Hradiště. But between the years 1730-1739 in villages with estate sheepfolds, three more Thomáš Fialas were born almost exclusively to families that were identified as shepherds. Because of the chronic unreliability of the age at death in the 18th century, any one of them could have been my ancestor Tomáš Fiala.
In addition to Tomáš born to Bartoloměj, two other Tomáš’s were born to Václavs, and a third to a Matěj. The Václavs could be excluded because I knew that was the name of Josef’s father; if Václav was the brother of Tomáš’s father, then the father would have be named differently because there would not be two Václavs in the family. Also, if Václav were the father of both Josef and Tomáš, then the 3rd degree of kinship would not apply because it would in fact be a 2nd degree relationship.  This is how I narrowed the selection of potential fathers to just Bartoloměj or Matěj Fiala.
Fortunately, Bartoloměj was an uncommon name, and so I managed to find him as the son of Jan Fiala. Bartoloměj’s correct identity was finally confirmed by the fact that he had a brother four years older than him named Václav. A final assurance that I had correctly untangled the web of relationships was the discovery that the father of Matěj (the other potential father of Tomáš) was Vít, not Jan, making it possible to exclude the last Tomáš Fiala.
The chain of relationships was finished: I had found the cousins Tomáš and Josef (fathers of groom and bride), the brothers Bartoloměj and Václav (grandfathers of groom and bride), and Jan (great grandfather of the spouses, father of Bartoloměj and Václav, etc.)

It was also possible to confirm the identity of the correct Tomáš Fiala, and in the process I found two more generations of the family, including my first known, traceable ancestor with the Fiala surname.

In later years, I confirmed these results when a sketched genealogy of this branch of my ancestors fell into my hands which some of the ancestors had put together, perhaps in the mid-20th century. They even included the wife’s name as if it they had had access to the non-existent parish register, but it must have been a family tradition. 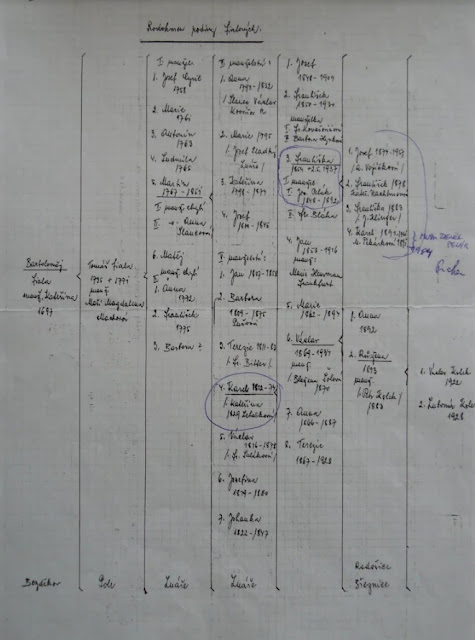 Sometimes you get lucky and find a way to prove your theories.

For a more detailed study about counting kinship degrees which also touches on impediments to marriage due to kinship , I suggest this book  for Czech speakers, and this book for English speakers.