Actually, I’m not sure exactly what I was hoping to find in SOA Prague when I went there to look up Martin’s marriage record; of course there was not going to be anything that wouldn’t be in any ordinary marriage record, which was merely the name of Martin’s father, and perhaps his father’s residence. Maybe at the time I was just regretting that I could not connect him to any Šnajberks from the tolerance applications. I had no choice but to start the hunt for Jiří.

From marriage entry, which I photographed at that time (now available online), I discovered that Martin was the son of the late George Šnajberk and that he was, “ex Nosin”, aka from  Nosin. The key was to locate “Nosin.”  In the marriage entry  there followed other words  which,I have honestly not yet read in entirety, but it was obvious that there was a connection between “Nosin” and the word Wlasimensi (the adjective vlašimský, meaning relating to town of Vlašim). Like a dog hot on the trail, I quickly worked out that Nosín is now known as Znosim, a village west of Vlašimi falling into the parish of Domašín. 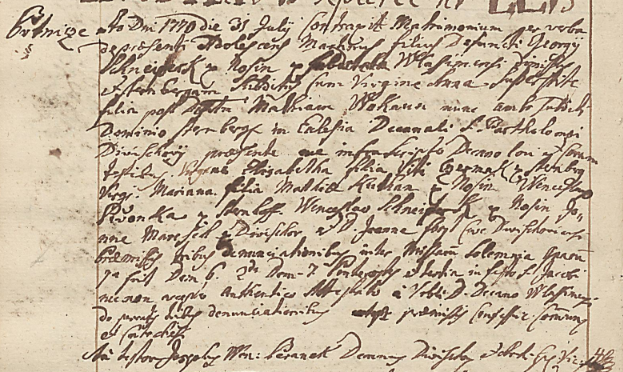 Obviously, the Domašín parish registers have not yet been digitized, but I eagerly started to go through the register Vlašim 6 (which contained baptisms, weddings, and burials of Znosím before 1755). Right at the beginning I found the baptism of František Světnička, on 31 June, 1749, who had Jiří Šnajberk, shepherd of Pomněnice as a godfather,. It looked promising, but as I continued to pore through more and more useless pages, my hope faded until it disappeared completely. I was disappointed, but I thought that maybe Martin was born in 1755 and was already baptized in Domašín. I insisted on believing the delusion that 15-year old marriages were possible. Domašin just had to wait.

While waiting for the digitization of the registers that I needed, I returned to the report of that retired tax administrator, the Honorable  František Šnajberk and I tried to focus on what was actually written about the Šnajberks in the “Reformation Proceedings”. Published every year since the late 1920’s, these “Reformation Proceedings” mostly contain articles about the Reformed churches and their history. On the internet, I stumbled across the 1929 Volume and in two days I had already ordered it from the antique shop on Dlážděná [street]. Because I was in a hurry, I just paid and put the book into the bag, and rushed for my train. On the train I immediately took the book out and eagerly ruffled through the pages, looking for any mention of Šnajberks. I leafed through everything from front to back and then back to front again, but found nothing that could be any hint. At the time, I silently cursed the tax administrator, until I looked and read on the cover that the volume was for the year 1930! Relieved, I apologized to Prešov sent new curses down Dážděná street! I spent the rest of the day in a questionable state of mind; it was a relief that the trail had not yet run cold, and I was really frustrated that they had sold me the wrong book, but mostly I was worried that the year 1929 would sell out. In my exasperated state of mind I envisioned hosts of customers lined up to buy the “Reformation Proceedings: Volume 29.”

The next day, I followed the path to the used bookstore, explained my problem, the staff apologized and to my great relief, found the correct year. I can not describe how relieved I felt with the book in tow, running to catch my train again, though I had of course checked the accuracy of the year on the cover first. Again, I eagerly flipped through the pages of the book on the moving train in blissful anticipation. And again, I lived through the same disappointment. Nowhere in this book was there any trace of any Šnajberks. New curses to Prešov.

No retreat, no surrender aka GENEALOGY TIGER

But a true genealogist never gives up. Never, under any circumstances. I continued my search. So I tried to look in the register of Benešov 6 (N 1737-1757), to see if I couldn’t find a clue in Poměnice. Fortunately the register had an index. But even though there were 14 references to baptisms of children with surname Šnajberk, none of them was named Martin. Still, I traced all 14 entries and made sure that the scribe didn’t make a mistake when he compiled the index. No mistakes, all the names in the records matched the index. 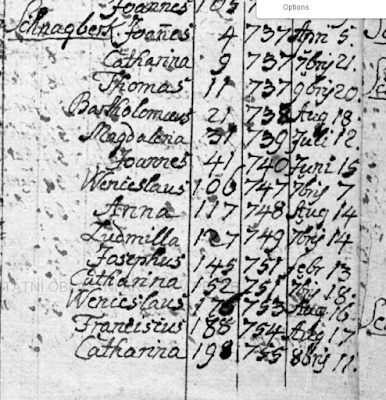 Then I noticed that between 1740 and 1747 there were no baptisms in the index for Šnajberk. That was suspicious; of course my Martin must have been overlooked. So I went through the register page by page through the baptism records from Jan (1740) to Vaclav (1747), but even still I found no Martin. So where is this blasted guy?

But if I couldn’t find his birth and baptism, at least I could find his death record. That was, at least, my next plan. And since there were more protestant registers in Soběhrdy, I looked there because Martin was, after all, a protestant!

Again, I went through the website for death records. My scrolling didn’t last long because Martin Šnajberk of Brtnice 12 died on 10 March 1789 after a long ailment. With a knowing nod, I patiently smiled at the Catholic registrar’s mistake. My patient amusement lasted only a moment until I typed my newfound data into my database. It showed that Martin definitely would have given birth to three more children after his death. “Herdek fix,” was at the time the mildest term that I used. He was not my Martin and it was not even Martin’s eponymous son born in 1781, because he was alive in 1808, married in Močovice. Redoing the search in the register of Soběhrdy 5 brought a wide range of deceased and buried Šnajberks and other relatives, but Martin was still nowhere. Apparently, Martin was not only still alive  in 1808, but also in 1811.

In June 2014, I could no longer endure [the wait] and so I again ordered registers in SOA Prague, among  which was Domašín 1. Of course Martin would be there. But he was not. Habitual optimism fouled once again.

Praxis pietatis haereticorum
I occasionally would try to compensate my ongoing disappointments in the search for the elusive Martin by searching the internet. I kept getting all the same familiar results with [search terms of] the Šnajberk name variants like Schneiberk or Schneiberg. But then, suddenly a new result popped out. I will not even describe the surge of hope with which I clicked on this new, previously unseen link.

The link took me to the excellent dissertation of Ondřej Macek, subtitled, “Sketch of the inner life of Czech heretics before issuing the Patent of Toleration and the first decade of tolerance of the Church.” I found several well-known events captured in the tolerance applications, but most of them were brand new.

In year 1756 in the parish of Benešov, the shepherd Josef Skrčený and his wife Magdalena, Jiří and František Šnajberk and Jiří’s wife Anna, were convicted of concealing heretical books, and in the case of Anna, it was actually a  repeated offence. Jiří Šnajberk allegedly had a centenarian father Jan, who prayed the Lord’s Prayer with a “Lutheran ending” which he taught the whole family.

On top of that, the Šnajberks gave a shelter to a traveling vendor of heretical books named Čoudil, who taught doctrinal heresy. The following books were found: a book by Václav Kleych, a postil [Bible commentary] by Jan Spangenberg and Dvanáctero přemyšlování [Twelve reflections] by Filip Kegelius.

So after all, there was a Jiří Šnajberk, whose existence I had begun to doubt. Again, I hoped that it could be my Jiří Šnajberk, father of Martin. How I would love to have a centenarian father who prays the Lord’s Prayer in the Lutheran way among my ancestors! Though, I did not want to attach much to the idea, having had so many disappointments thus far.

This work was published later in the book Po vzoru berojských [Following the Example of the Bereans: The Life and Faith of Czech and Moravian Protestants] which contained a wide range of other interesting articles. Originally I did not want to buy it, as I had already read Ondřej Macek’s dissertation, the article most relevant to me, but finally after a year and a half I could not resist. Only later did this prove its true value.

If it’s not in the parish records, it will be in the land records
In December of the same year (2014), I decided to try a different tack. For a change, I ordered the land record book of the estate of Česky Šternberk from the archives. I was hoping to find some clues in the entries of Brtnice and later for Měchnov. Lucky me, once again I had the good fortune to find entries that interested me. Martin buys from his mother in law the cottage in Brtnice, later he bought a pub in Měchnov. He sells the pub and buys the farm land which he later leaves to his son Josef. As a result, I mapped the financial situation of Martin, Martin’s son Josef, and his son Martin, the guy from the beginning of my quest, but about old Martin I learned nothing new.

And I still did not know who Jiří was. Was he the guy who was convicted for possession of banned books? Was he the son of the centenarian?

That left nothing but my last desperate move.