On my first trip to the Czech Republic (I suppose I’m supposed to call it Czechia, but that sounds so ridiculous I can’t bring myself to even write it, much less say it), I realized that my beloved Czech genealogy is inextricably linked to the Czech language. Therefore, I must not only learn everything there is to know (!) about Czech genealogical research, but I must become a fluent speaker of Czech.

I’m so excited about this! I love learning languages, and I really especially love Czech! Learning to speak Czech is a totally achievable goal, through a lot of hard work, of course. I know this because I am an advanced-high speaker of French, advanced-mid in Arabic, and I’m guessing that I would get an intermediate-low for several other languages if I were to randomly take an OPI right now. Too bad the Foreign Language Achievement Testing at BYU (the only test of its kind in the nation!) came out a year after I graduated. Anyway, it doesn’t have Czech. Yet.

The point: I love languages. I studied how to teach world languages. I’m quite excited about learning Czech.

Part of me feels that my whole life has prepared me for this goal. This is the first time that I have been in a position to learn Czech, really. In High School, the choices were Latin, French, or Spanish. In University, I would have taken Czech, were it available on a 100 level course. Sadly, it was only available to returned missionaries at a 300-level. So I took French, Arabic, ASL, and TESOL (Teaching English to Speakers of Other Languages) instead.

I sometimes wish that I had taken German. After all, that would be so much more relevant to my study of Czech genealogy. However, I think that my skills in Arabic also prepared me to learn Czech.

And as a side note, my fifth cousin’s brother in law was from the exact part of Jordan (Irbid) where I spent a semester studying at Yarmouk University, and he knew the family with whom I stayed. So, that was a really funny coincidence.
But Czech…well, going to Ostrava was like a crash course in it. Did you know that Ostrava is one of the largest cities in the Czech Republic, and yet it is nowhere on the CR’s tourist bureau information app? That’s because it’s basically the equivalent of Pittsburgh, which used to be the steel capital of the United States. Who would go on vacation to…Pittsburgh!? Ostrava was the steel and manufacturing capital of the Austro-Hungarian Empire, and its industrial production remains relevant today. For example, the Czech Republic exports more cars per year than its population, or so I was told. Well, many of those cars are made in Ostrava. 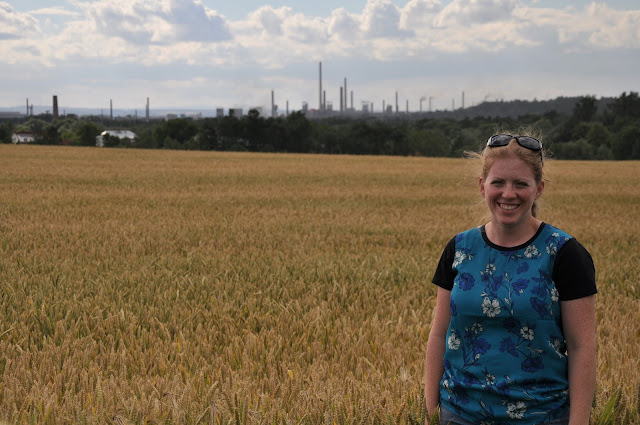 Me with Ostrava in the background
My husband and I were stupid tourists in a place where there is very little tourism, which meant we had to speak Czech. And we don’t speak Czech. We are definitely novices. But I got a feel for the language.
My first impression continues to be validated now that I’ve come home and started a concerted effort to learn Czech (thanks Amazon! The Pimsleur course is really perfect for my lifestyle, since I’m always driving or cooking or cleaning) : spoken Czech is full of the schwa (ə)!!!!
It’s just full of it! When in doubt, schwa it out!
Seriously! Any ending, if you don’t know how to pronounce it, just slur it into a schwa sound and it will be at least comprehensible.
But let me tell you, it’s really difficult (in a fun and challenging way) for me to differentiate between ulici and ulice, between kdy and kde, and 100 other words. It’s just…there’s so much schwa. SO MUCH SCHWA.

Ted’ jsem just being stupid…ale co jiného je zřejmý? Užívám moje “nerdiness.” I recently described myself this way, and I really think it fits: a nerdy, bookish, extrovert. That kind of defies the stereotype, but so it is!

What is life for if not to find joy. I can’t tell you how much happier I have been since discovering my love of Czech genealogy, and trying to find answers. I feel that the trip Danny and I took significantly expanded my vision. It feels frustrating, humiliating, and daunting: but it’s also so exciting and fun. It’s the kind of fulfilling challenge that I have been craving for the past decade.