“I  would suggest only one major correction, so that you are not misled in your ancestors relations.
The section starting with “Georgi  termino”

It vaguely transcribes as follows

What is important Georg and Michal and not persons but days in the year when the  monetary obligations were due (should be paid).
The feast of St. George = 29th April
The feast od Michael = 29th September

Other similar terms were for example St. Havel or St. Wenceslaus.

So this record is not revealing any further information about the family. Only the first sections states that
Jan Krčmařík sold his land to his  son named Michal. You have probably switched them.”

Oooooh that makes so much more sense!
You know what is truly funny about this situation is that there really are two people named Michel and George, and I’m trying to figure out which one is the father of my Joseph Krczmarsky!
Here’s an imperfect recapitulation of my problem:
My ancestor Anna Krczmarska married Joseph Schumbera in 1842 in Nová Bělá. She was 26 years old and from house #36 [Nová Bělá], with parents Joseph Krczmarsky and Marianna born of Johann Tomanek.
This gives her an estimated birth of 1816.
No Krczmarsky children are born in Nová Bělá until 1827, when two sons named Anton Krczmarsky are born and listed on the same page, one to Franz Krczmarsky, and the other to Joseph Krzmarsky and Marianna Tomanek of #36. No other children are born to Joseph and Marianna after this.
The land records for Nová Bělá show that Joseph Krczmarsky bought #36 in 1827 from Johann (?) Vecera.
So where did Joseph live before? Where was Anna born? Who are Anna’s siblings? And most importantly, who are Joseph’s parents?
I started out by looking in Gross Kunzendorf because Marianna Tomanek’s father is from there, sometimes listed as Johann Tomanek, sometimes listed as Wenzl Tomanek. I found a Joseph Krczmarsky who bought or inherited #73 Gross Kunzendorf from his father Michel Krczmarsky in 1807.
I would have just assumed that this was my guy, but I had already looked at the deaths in Nová Bělá and found a Joseph Krczmarsky who died in 1843 at house #25, age 63. This gives him a birth of ~1780.
What is really awful is that, to my understanding, the Gross Kunzendorf (Velké Kunčice, Kunčice nad Ostravici) records are MISSING or non-extant before 1825. That’s horrible! REALLY HORRIBLE. It seems like both the Vratimov records and the Gross Kunzendorf records were kept together, and of course that is where almost all of my ancestors were from! OF COURSE.
However, I chose to look in the neighboring parish of Slezska Ostravá, and I found a birth for Joseph Krczmarsky to George Krczmarsky and Apollonie in 1779, at #66 Švirkl.
Looking closely at the #36 Nová Bělá record, I found this notation:

I think it’s basically saying that upon the death of Joseph Krczmarsky and his wife Marianna, [Jakob] will inherit his house.
Jakob inherits the house in 1843 after Joseph Krczmarsky dies. Jakob’s marriage record to Barbara Macha shows that he is the son of Joseph Krczmarsky and Marianna Tomanek too.
If Joseph died in 1843 at the age of 63, he was probably the son of George, not Michel.
Švirkl is a hamlet that did not survive past the 1828 creation of the Vítkovice steel works. Right now, what is on that land is a giant steel plant. 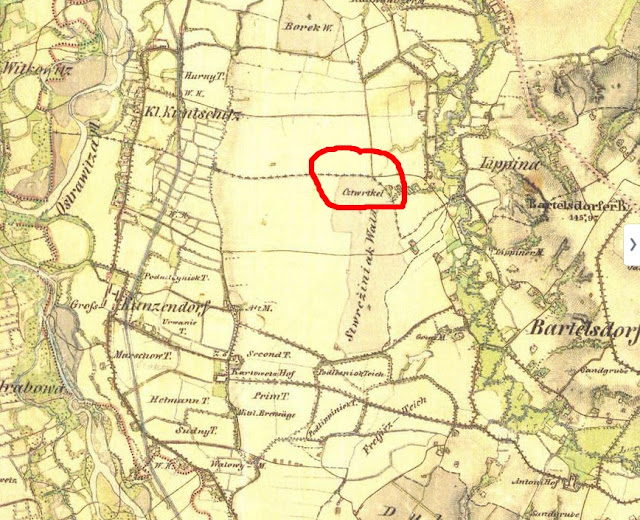 The hamlet is called Cztwrtkel on this map.
Locating this hamlet was they key to solving my problem.
When I found it, I thought to myself, “Hmm. Well, if I were living in Švirkel, I would not want to go to church in Gross Kunzendorf. I would go to church in Bartelsdorf.” So I looked in the Bartovice parish records and YES, indeed, I found ALL of the births of Joseph Krczmarsky and Marianna Tomanek’s children, including those of his first wife Marianna Friedrischek.
But the most important thing I found was this record:
http://vademecum.archives.cz/vademecum/permalink?xid=be896130-f13c-102f-8255-0050568c0263&scan=73
Joseph born 28 February 1782 at #73 [Bartovice? Gross Kunzendorf? Klein Kunzendorf? Radvanice? Švirkel/Švrnkl?] to Michael and Marian Krtzmarziek.
Basically, this is evidence that there are two Joseph Krczmarskies. The land records in Gross Kunzendorf were for a different Joseph Krczmarsky, the one who was the son of Michel, the son of Jan.
My hypothesis is that Jan is the father of both Michel and George. However, I’m having a really difficult time finding anything else about George. It is basically a miracle that Joseph Krczmarsky son of George and Apollonie of Svirkel was baptized in the Slezska Ostrava parish; otherwise I would have had no reason beyond a 2 year discrepancy in dates to believe that he wasn’t the son of Michel. But it doesn’t seem like any other children of George were born there.
I’m also really confused because #73 (or sometimes #43?) Gross Kunzendorf is right where Švirkel is on the map. That land went from Jan Krczmarsky to Michel Krczmarsky to Joseph Waschiczek.
Which is another headache, because the Waschiczeks are from the other side of my Czech lines. I don’t yet know how this Waschiczek fits into my family tree.
My hypothesis is that the founders of the steel mine bought out my ancestors home in 1827, which is what caused them to leave to farm in Nová Bělá, two villages over. In 1828, #73 Gross Kunzendorf was not being lived in, but was “authoritarian” (?) property.
My question: where can I find more records about Gross Kunzendorf? I need to read more about the history of this place. Surely, surely, there must be some records that exist for these people. They can’t all have been destroyed. Why oh why oh why are my ancestors from this parish?!?!?!?! Nová Bělá’s records are in tact up until the 1600’s. This is so weird.
I will be traveling to the Czech Republic in one month with my husband. Maybe we will be able to find some books or records there. I will just keep praying.