I’ve been struggling with the idea of jurisdictions ins the Czech lands.

Jurisdiction is the official  power to make decisions. The jurisdiction matters in genealogy because most of the documents that are left behind are remnants of various religious or political events. Vital records were recorded both for religious reasons (the Bible illustrates the importance of record keeping in Revelation 20:15, for example) and political reasons, such as for military drafts (Empire level politics), and to make sure that the taxes and duties were performed (Estate level politics).

The land of my ancestors is old. OLD. Very, very old. Most villages in my corner of Moravia can claim things like, “the first known record of this village is in 1250 AD, when so-and-so conquered such-and-such neighboring village and built a fort directly outside of it, naming it after such-and-such place/event/person/thing.”

Here’s the Czech wikipedia article on Vlčovice. It says that the first written mention of Vlčovice dates from 1437 (under the name “Velicovice”).

Okay, so…why do the earliest available parish records for Vlčovice begin *only* in 1720? And why don’t land records appear to begin until 1762 – for almost any village on the Hukvaldy estate?

As an American genealogist, it’s actually pretty comical. Pre-1720 vital records? Uh…yeah, I don’t think so. Yes, there are reliable records in the 18th Century United States – or Colonies – or whatever it happened to be called during the year of interest. That’s just the main thing: from my perspective, jurisdictions change a lot.

So, I had been approaching this problem with the idea that, “Well, if I can’t find pre-1720 records, but the village is clearly as old as 1437, and Catholics were probably keeping records in the 1650’s (because other towns do have vital records that go back that far, and even into the late 1500’s), then maybe I have the jurisdiction wrong.”

Maybe the village wasn’t called, “Vlčovice.” Maybe the Vlčovice records were stored with the Hukvaldy Estate records. Maybe they are located in a completely different archive.

One thing that occurs extremely frequently in Czech history is village name changes. Depending on who has “official” jurisdiction over the land, German, Czech, or Russian names for villages may be used. And guess what; some of them are totally not similar in any way at all. But that is fodder for a different blog post.

I was puzzled, because I understand that the way vademecum.archives.cz works is to organize village records by the modern Czech spelling. This greatly facilitates searches, because a researcher may not know that the name of the village in the early 1800’s was actually Kunzendorf, as opposed to Kunčice. So, apparently the archivists in the Regional Archives of Opava were thorough when they organized these records; I would assume that if there were any mention of Vlčovice under a different name, it would still get the label of “Vlčovice” on the record. But…so…where were the other records?

I searched for “Huk” and really I could not find anything that I knew included records other than those for the village Hukvaldy. I felt like I was going around in circles. It’s hard to find information about the Hukvaldy estate online in English.

So I started to search for information in Czech. 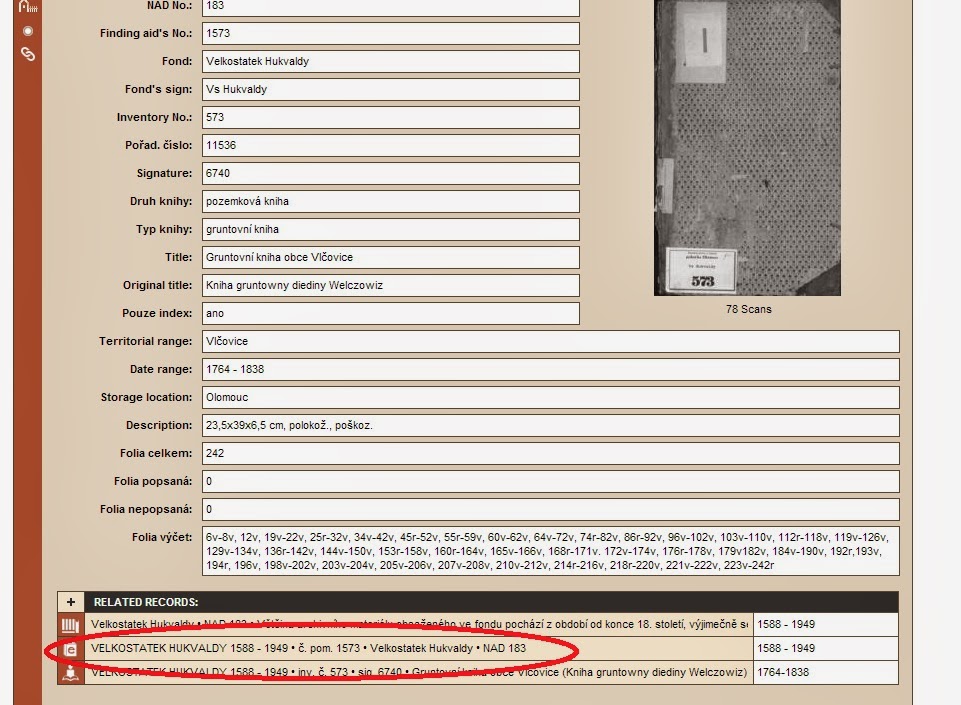 I found a link on the next page that said, “Finding aid’s intro.” 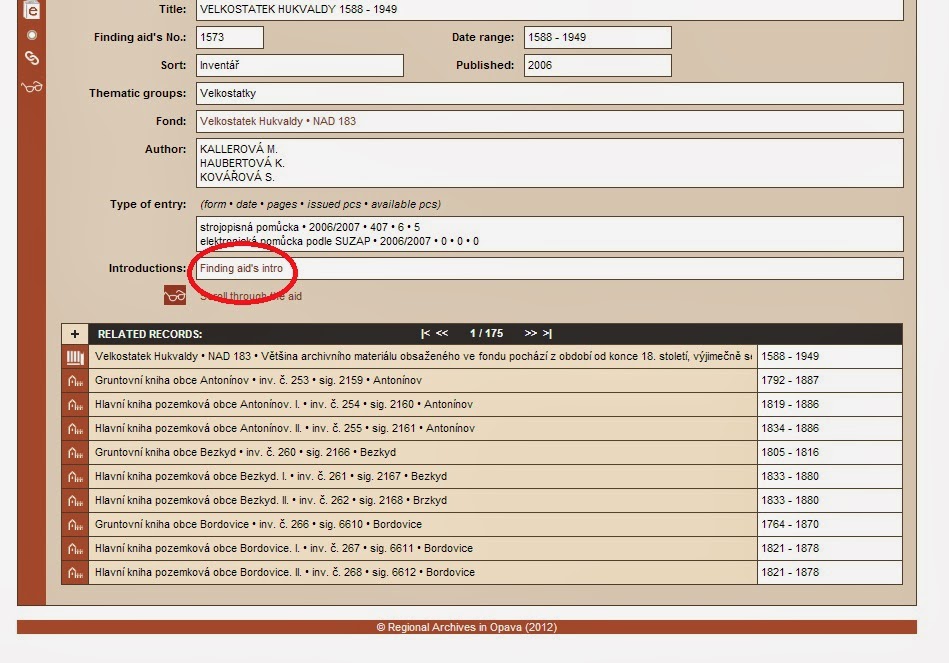 And here we have 23 pages of detailed information about the Hukvaldy Estate holdings in the ZAO (regional archives of Opava)!! This is exactly what I had been looking for!!

At the end? A bibliography of books written about this place during this time. I don’t know how I will find some of these books; they had better be digitally OCR’d or at least copy-and-pastable so that I can plug them into google translate, otherwise, even if I find them, they will be basically useless.

Which is exactly what I did to this document, and quickly learned that there was a huge fire in the Hukvaldy castle in 1762, which destroyed many records. That some did survive, but not very many.

But hey, it answered my questions! And now I know how to use these great finding aids! And hopefully, so do you!