I disliked “History” as a subject yet love Family History.

I was reminded of why this is yesterday while doing some research on Austerlitz.
In most of my High School/College History classes, there was a huge focus on political movements, aka wars. And I could never keep them all straight in my mind, because there were so many dates and places. Suddenly there was a whole new set of vocabulary that was really foreign to me. Coalition? Movement? Strategy? Battalion? Regiment? Conquest? Campaign? Sure, I knew what they meant by definition, but I had no connotations from which to derive real meaning.
At some point, too much of these sterile, context-less words plus my habitual sleep deprivation combined in perfect harmony to put me to sleep. “Ughhhhhhh…it’s so…boring…” I would think to myself.
Which, if you think about it, war? Boring? Same sentence? Um…well, probably the actual reality of marching, waiting, eating crummy food, and watching was boring, at least for long segments of time. But the actual battles? Isn’t life-changing violence and action the absolute antithesis to the blasé and humdrum?
I still find myself nodding off when reading wikipedia articles on various battles, for example, the Battle of Austerlitz.
I think the reason why I have found the study of war so boring is because it had always lacked a human context – a real person. A framework for the event which could help me, in such a distant time, place, and world, relate to their experience.
I was researching some military terminology from some parish records for a friend, and I ended up researching a little bit about the history of Austerlitz. Of course I had heard “Austerlitz.” I studied French History! How did I not realize before 2013 that Austerlitz is a place located in the present Czech Republic!?
Suddenly, the event became real to me, because I had my human context. I started wondering about this man – did he really perish in the Battle of Austerlitz? If so, how would we know? What did he experience? What did he think about Karl Mack and his reforms (and “reforms”) to the Kaiserlich-Koniglich Army? How much marching did he do? Was it freezing cold? Did he believe in the “cause” (which I couldn’t seem to find – but then, that is a common theme I have noticed as I study war: so much of it seems futile and pointless).
Mostly, I was surprised that there wasn’t a list somewhere online already (that I could find) that enumerated which soldiers were in which battalions during the Napoleanic wars. I did find a rather detailed essay on the Austrian Army 1805-1809, but it lacked anything about my context, this common soldier in an Infantry unit. If we knew which company he was in, where was the list of the people for that company? Why couldn’t I find it?
Before you laugh at my lack of understanding of military ranking hierarchy and overall general ignorance as to military records, I must confess, I have extremely little experience with military records of any kind. What records pertain to my own family that I have used are all World War II-centric, and mainly involve draft registration cards and things like that. But, having spent a considerable amount of time reading through Transitional Genealogists Forum posts, I do have some cursory knowledge about potentially available records caused by wars. Of note, American Civil War Pension records.
I have yet to learn about the wonderful world of Civil War Pensions, but I am sure that will be most enlightening for my Grandma Vasicek’s side of the family.  All of my husband’s and mom’s direct line ancestors were in Utah during the Civil War. Most of my (paternal grandpa’s) Czech ancestors immigrated ~1880’s from Moravia to Texas, so they missed the Civil War. That leaves my paternal Grandpa’s lines, which were mainly from Tennessee, Virginia, Illinois, and Kentucky. Their lives and experiences would be the perfect context for me to be interested and learn about the American Civil War.
Have you ever thought studying war was boring? Did adding a human context help you? Is it a little bit sad that we (or is it just me?) need to do this in order to make the subject interesting enough to absorb? Or is it sad that the way history is typically taught in American schools by necessity has to deprive students of any human context?
I have been tested on the Battle of Austerlitz at least twice in High School and twice in College. How did I never realize my own ancestors were only an hour and a half away at the time? 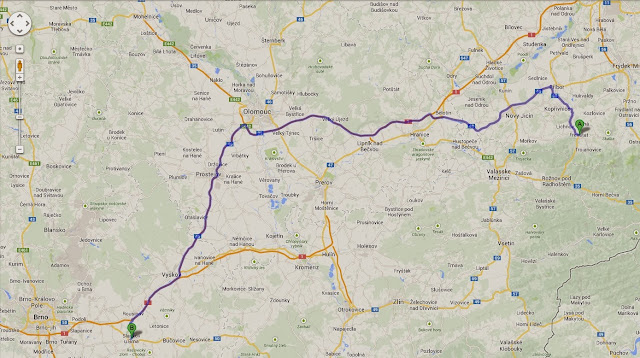 2 thoughts on “My Human Context for Austerlitz”